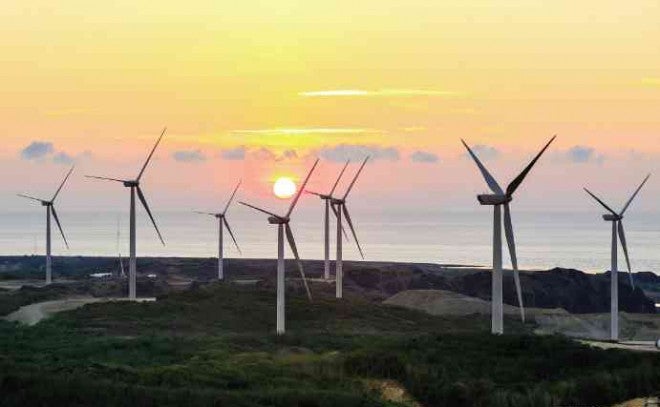 DAWN FOR GREEN ENERGY. THE WINDMILLS in the wind farm of the Energy Development Corp. (EDC) in Burgos, Ilocos Norte, that is now generating up to 150 megawatts of clean electricity. CONTRIBUTED PHOTO

BAGUIO CITY—Renewable energy firms have scaled up their investments—from small hydropower projects in the upland Cordillera region to wind-farm projects in the coastlines of the Ilocos region—in order to fill an impending energy deficiency projected by the government, a green energy firm said on Saturday.

The government’s solution had been new coal-fired facilities, but more clean-energy projects may be sufficient to fill the projected supply gaps and preserve the environment, said Reman Chua, business unit head of the Energy Development Corp. (EDC).

Chua said the project eases some of the anticipated problems with electricity supply due to delays in the construction of plants meant to provide additional power capacity for a growing population.

But many of the delayed projects are coal-fired plants.

“[Renewable energy sources like wind] are definitely better than coal. [They do] not add to the greenhouse gases. [Renewable energy production represents] 129,000 tons of avoided carbon emission a year [because it replaces electricity produced by coal],” he said.

He said clean energy taps indigenous resources like wind and does not require imported fuel like coal.

Chua said the project is touted to be the largest wind power project in Southeast Asia.

He said the Burgos wind farm was officially commissioned on Nov. 5.

This meant that the plant is now “physically connected to the Luzon grid and is delivering power to the transmission system,” according to an EDC disclosure report sent to the Inquirer.

EDC said it invested $450 million to develop the Burgos project now operated by the EDC Burgos Wind Power Corp. and had closed a $315-million financing deal to operate the facility.

It said the Burgos facility consists of 50 units of model V90 wind turbines and is the only facility to date to be nominated by the Department of Energy to the Energy Regulatory Commission as an eligible project under its feed-in tariff system.

Section 7 of the Renewable Energy Act of 2008 (Republic Act No. 9513) mandates a feed-in tariff system for electricity produced from wind, solar, ocean, run-of-river hydropower and biomass to hasten the development of emerging renewable energy resources in the country.

The law, among others, prioritizes connections to the grid for electricity generated from emerging renewable energy resources, and prioritizes the purchase and transmission of, and payment for, such electricity by the grid system operators.

“The 150 MW [produced by the Burgos project] will ease the [power] demand. This is a concrete contribution,” Chua said. Jhoanna Marie Buenaobra, Inquirer Northern Luzon