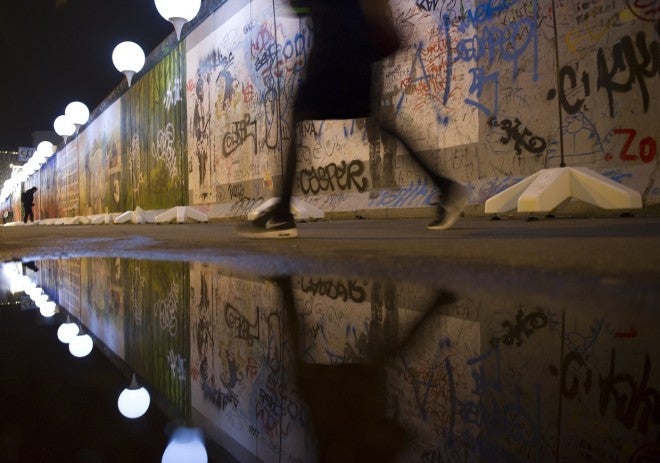 BERLIN, Germany—Germany on Sunday celebrates the 25th anniversary of the night the Berlin Wall fell, a pivotal moment in the collapse of communism and the start of the country’s emergence as the major power at the heart of Europe.

A 15-kilometer (nine-mile) chain of lighted balloons along the former border will be released into the air early Sunday evening—around the time on Nov. 9, 1989 when a garbled announcement by a senior communist official set off the chain of events that brought down the Cold War’s most potent symbol.

The opening of East Germany’s fortified frontier capped months of ferment that ushered in Poland’s first post-communist prime minister and saw Hungary cut open its border fence. The hardline leadership in East Berlin faced mounting pressure from huge protests and an exodus of citizens via other communist countries.

The collapse of the Wall, which had divided the city for 28 years, was “a point of no return … from there, things headed toward a whole new world order,” said Axel Klausmeier, the director of the city’s main Wall memorial.

Chancellor Angela Merkel, who grew up in East Germany, is opening an overhauled museum Sunday at the site—home to one of the few surviving sections of the Wall.

Merkel, 60, who was then a physicist and entered politics as communism crumbled, recalls the feeling of being stuck behind East Germany’s border.

“Even today when I walk through the Brandenburg Gate, there’s a residual feeling that this wasn’t possible for many years of my life, and that I had to wait 35 years to have this feeling of freedom,” Merkel said last week. “That changed my life.”

The future chancellor was among the thousands who poured westward hours after the ruling Politburo’s spokesman, Guenter Schabowski, off-handedly announced at a televised news conference that East Germans would be allowed to travel to West Germany and West Berlin.

Pressed on when that would take effect, Schabowski seemed uncertain but said: “To my knowledge, this is immediately, without delay.” Soon, Western media were reporting that East Germany was opening the border and East Berliners were jamming the first crossing.

Border guards had received no orders to let anyone cross, but gave up trying to hold back the crowds. By midnight, all the border crossings in the city were open.

East Germany’s then-leader, Egon Krenz, later said the plan was to allow free travel only the next morning so citizens could line up properly to get exit visas. But with the leadership’s control over the border well and truly lost, Germany was soon on the road to reunification less than a year later, on Oct. 3, 1990.

Much has changed beyond recognition, though some inequalities persist.

Wages and pensions remain lower, and unemployment higher, in the east than the west. Many eastern areas saw their population drop as people headed west for jobs, something that is only now showing signs of turning around.

There are cultural differences too: a higher proportion of children are in daycare in the east, a legacy of communist times, and the opposition Left Party—partly descended from East Germany’s communist rulers—remains strongest in the east.

But the progress toward true unity is seen in Germany’s top leadership: Not only is Merkel from the east, but so is the nation’s president, Joachim Gauck, a former Protestant pastor and pro-democracy activist.

Germans today can be grateful to have lives and opportunities, Gauck said, “that endless numbers of people in the world can only desire and dream of.”