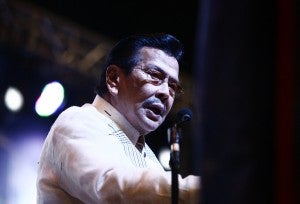 After giving out the “peace and order activity allowance” of members of the Manila Police District (MPD) on Wednesday, Manila Mayor Joseph Estrada said employees of City Hall are in for a Christmas treat, too—the promised fourth tranche of their salary increases.

In July, during his first State of the City Address, Estrada promised some 4,000 city hall employees that they would get their salary increases mandated by law “within the year.”

Estrada said the salary increase would be retroactive to January 2014. However, he did not say when it would be released and how much it would be. This has yet to be finalized by the Manila City Council. Neither did he say why the back pay is not retroactive to 2012 when the increases were due.

All government employees were scheduled to receive the fourth tranche of wage hikes in 2012 under the Salary Standardization Law but the previous city administration reportedly claimed that there were no funds available.

Estrada noted that the long-suffering employees of the city hall had been envious of MPD policemen, who had received P20,000 so far from the city government as their peace and order activity allowance for eight months of the year, in recognition of their peacekeeping duties and the risks they face on the job.

“Hopefully after we give this, employees will no longer complain. I don’t want employees to work for the city government without being compensated properly,” Estrada added.

Aside from the salary increase, Estrada said employees would also be receiving so-called “Orange Cards,” a health benefit extended to city government employees, MPD policemen, barangay officials, senior citizens and the poorest of the poor in Manila.