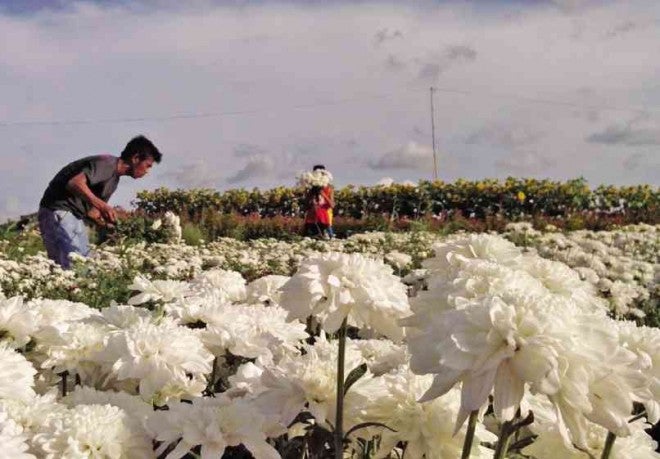 WONDER white blossoms proudly thrust their heads up to the sky between plots of sunflowers as more people come to pick flowers in Naga City’s “Little Baguio.” SHIENA M. BARRAMEDA

NAGA CITY, Camarines Sur—Josephine Cambe makes her way toward a bed of white flowers, her face was infused with joy, and carefully cuts her first dozen of blooms for her deceased loved ones.

The blooms cover 80 percent of more than three hectares of land in Barangay Pacol, Naga City. The remaining area has four beds of towering sunflowers.

Customers like Cambe and her family are enjoying the same privilege of picking the flowers straight from the beds under the guidance of farmers who grow the plants year-round in the mid-upland village of Pacol. The place has come to be known as Bicol’s answer to Baguio City’s flower fields.

For two years in a row, Cambe, 46, says she and her family have been traveling 34 kilometers from the town of Minalabac in Camarines Sur province to Pacol to pick and buy flowers from the farmers for the All Souls’ Day observance. They came to know of the farm from friends.

“It’s cheap and surely fresh compared with the ones we used to buy in the market,” she said.

Pacol is the new source of fresh flowers for shops and residents all over Bicol. Regular visitors call it Little Baguio or “Little Dangwa,” its busy stalls selling fresh flowers lining the street next to the farms.

Gilmor Dimaano, 47, one of the farmers, says flowering plants have been cultivated in the village since the late 1980s after irrigation to the rice paddies were shut off with the emergence of a residential subdivision. He says tenant farmers and landowners converted to flower farms after seeing the soil’s potential.

Dimaano says the women went to Baguio for a seminar on flower farming with the Department of Agriculture and came home with flower seedlings for the first batch of plants they cultivated.

The farmers recycle the roots left from every harvest season to start the batch of flowers for the next season. This ensures them of planting and harvesting at least three times every year.

They don’t use chemical fertilizers, opting to use chicken manure from Baao town, also in Camarines Sur, Dimaano says. The inputs are bought at P170 a sack.

“The secret is in how you plow and ready the soil. After plowing and before replanting the roots, we mix the chicken droppings with the soil to make it fertile,” he says.

As to insecticides and pesticides, chemicals are used only when needed.

“Our only real problem is rain. If there is too much rain, the plants die. They drown with too much water,” Dimaano says, remembering the P30,000 they lost this year after Typhoons “Glenda” and “Mario” damaged 100,000 plants or five of their plots.

The farmers also use organic farming techniques, such as regularly turning the soil and guarding against weeds. In two to three months after planting, the flowers start blooming.

Antonio Banog, 50, who owns 1,000 square meters of the field, says he learned farming from his mother Vicenta, who was among the women who brought the first flowers to Pacol.

“She taught me to love the soil and not abuse it with chemicals as they make the soil acidic so that less flowers are produced,” he says.

Gil Guerrero, 36, who cultivates 500 sq m of the farm, says the farmers experiment by introducing new plants. This year, he started planting sunflowers because of the high demand, especially during harvest time in February.

Dimaano says he plans to introduce roses into his plots when he has enough capital so Pacol could really live up to its title of Little Baguio.

The farmers “import” from Baguio the flowers they have yet to grow, such as roses, anthuriums, orchids and everlasting.

Fidela Lagos, 65, who tills 1,520 sq m of land, says she and her sons Ernesto, 39, and Jovie, 38, sell the flowers, either arranged or freshly picked, along with their neighbors on the streets.

Dimaano says the wonder whites sell like hot cakes to customers who come from as far as Sipocot, Camarines Sur, and towns in Camarines Norte, and buy by the truckload.

Angelina Andalis, 64, a flower arranger from Pili town, says she used to buy flowers from Albay and Baguio but started going to Pacol three years ago because the flowers there are cheaper and the place is more accessible.

Dang Azulis, 49, who owns a flower shop in Sipocot town, Camarines Sur, says she saves a lot by going to Pacol instead of Baguio.

He estimates that during peak seasons the daily income is P50,000. During the lean months, the farmers bring the flowers to the city market where people buy for weddings, funerals and birthdays.

Although the farmers of Pacol fear the rainy months, they say that after 10 years of cultivating the flower farms, they continue to see promising prospects.

“It’s really a good venture plus you wake up to this beautiful, relaxing view every day,” they say.