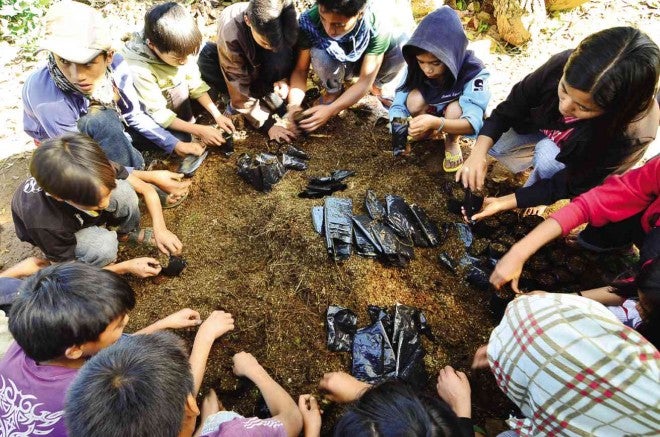 STUDENTS in Kibungan town in Benguet province join hands in planting tree seedlings and building nurseries to help replenish their forest. More than 100 nurseries have since been completed in the Cordillera region. PHOTOS BY JP ALIPIO/CONTRIBUTOR

BENGUET, Philippines—For the last three years, schoolchildren in the Cordillera region have been doing their share in rebuilding their ancestors’ forests.

For example, June and July each year means almost every pupil of Lubas Elementary School (LES) in La Trinidad town, Benguet province, must collaborate to propagate tree seedlings at a school nursery that was developed in 2012.

Even kindergarten pupils have their assignments, says LES principal Bridget Dacquigan. Their little hands are employed for emptying seedling bags, which they turn inside out and fold into neat piles so these containers can be recycled and refilled with fresh seeds for the next planting season, she says.

The children tend to the nurseries until the seeds mature into saplings. The school grows coffee trees, which it donates to the community for planting in the neighborhood, or near the community watershed. Some are replanted at the school yard.

The school also encourages its students to contribute other types of seedlings, says Celina Biray, the Grade 6 adviser. These days, the nursery has been nurturing mango seeds and even seeds to propagate flowering plants like marguerites.

Pupils, like Jovelle Culop and Norvin Ancheta, have taken the skill and practice learned at home to their schools.

Culop, 12, cultivates sugarcane and orchids and shares his gardening knowledge with his classmates. Ancheta, 13, a son of vegetable farmers and dealers, learned farming early and is happy to share his knowledge of vegetable cultivation with other children.

The practice is replicated by 107 other schools that tend to their nurseries in the town of Banaue in Ifugao province; the towns of La Trinidad, Bokod, Kabayan, Bakun, and Kibungan in Benguet; and the communities surrounding Mt. Amuyao in Barlig town, Mt. Province and Mt. Pulag, Luzon’s highest peak which hosts a rich flora and fauna.

These schools are followers of a forest rebuilding project called “Roots and Shoots,” which was developed in 2011 by an environmental advocacy movement called the Cordillera Conservation Trust (CCT). 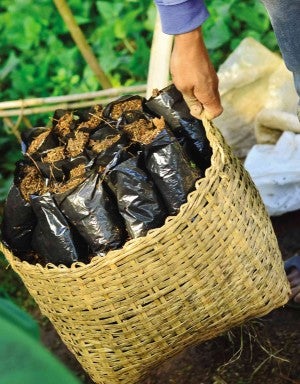 SEEDS to rebuild a forest in Benguet.

But what makes these schools unique, he says, are their locations. Many are tucked deep in the hinterlands of the Cordillera. He says these schoolchildren live in the forest and have placed greater value in the upkeep of their trees.

Alipio says people who share an environmental advocacy often rely only on the idea of forest preservation because a few have access to actual forests in their daily lives.

But the schoolchildren involved in the “Roots and Shoots” project use these forests and have greater stake in keeping the woodlands thriving, he says.

A pilot nursery was developed in 2011 by pupils of Bangen Elementary School in Bokod. CCT first visited that school, which can be reached after a 12-hour hike, to bring aid when the province was struck by Typhoon “Pepeng” in 2009.

In the end, the nurseries are the students’ sole responsibility. Not all nurseries do well and some of these need to be revived, Alipio says.

But when all nurseries function well, the schools combined could generate up to 200,000 tree seedlings a year, he says.

It helped that many of their pupils come from agricultural families.

Culop has mastered home gardening. “I taught some of my classmates the best way to plant vegetables and sugarcane, and to raise hanging plants,” he says.

Biray says many of the LES pupils tasked to handle the nurseries enjoy their assignments. “They like the chore. When it comes to work, they could be entrusted with various responsibilities. They do their chores even when I am not around,” she says.