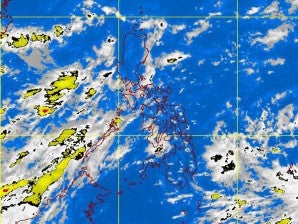 Governor Joey Salceda of Albay, one of the three affected provinces, ordered the suspension of Monday classes in the elementary and high school levels as disaster officials braced for the entry of tropical storm Pedring.

The governor also ordered the immediate evacuation of residents from flood-prone villages in the towns of Polangui, Oas, Libon and Malinao to ensure their safety.

According to an 11 a.m. update from the Philippine Atmospheric, Geophysical and Astronomical Services, or Pagasa, the provinces of Catanduanes, Albay and Camarines Sur had been placed under signal No. 1. Pedring was sighted 600 kilometers east of Virac, Catanduanes, packing maximum sustained winds of 95 kilometers per hour near the eye wall and gusting at 120 kph. It was moving westward with the speed of 22 kph.

According to a Pagasa bulletin, these areas would experience winds of 45 kph to 60 kph within the next 36 hours.

Salceda, through the Provincial Disaster Risk Reduction and Management Council (PDRRMC), which he chairs, said he decided to suspend classes and evacuate people based on the advisories of Pagasa and the Office of Civil Defense and as preventive measures amid projection of heavy rains to be brought in by Pedring.

Salceda also reiterated the no-sailing policy in all ports of Albay and advised fishermen to refrain from going out to sea amid turbulent weather expected by late Sunday or early Monday, the projected time that Pedring would hit Albay.

Some rice farmers in Albay started harvesting in advance to cut on possible losses due to Pedring.

Rice farmer Alfie Solano whose rice paddies could be found in the boundary of Guinobatan and Camalig towns said he felled the branches of a Talisay tree along the road to get sunlight and partly dry the rice.

Yolanda Ortiola, also a farmer, said she had to harvest partly green palay.  “We must not waste time before (the) storm snatches yet another cropping cycle,” she said.

Pedring, located 600 kilometers east northeast of Virac, Catanduanes, as of early Sunday, packed maximum sustained winds of 95 kph near the center and gustiness of up to 120 kph, moving westward at 22 kph.

It would be 420 km east of Baler, Aurora, by Monday morning, 20 km southeast of Tuguegarao City by Tuesday morning, and 240 km northwest of Laoag City by Wednesday, the Pagasa said.

On Sept. 26, 2009, typhoon Ondoy, one of the most destructive typhoons in recent years, made a landfall in Aurora. It also dumped record rainfall on Metro Manila in six hours, flooding 80 percent of the metropolis and killing hundreds.