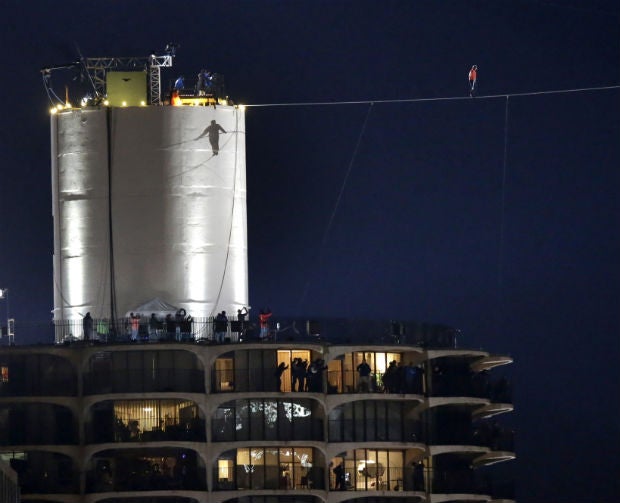 The shadow of daredevil Nik Wallenda is cast against the West Marina Tower as he begins his tightrope walk uphill at a 15-degree angle, from the Marina City west tower across the Chicago River to the top of the Leo Burnett Building Sunday, Nov. 2, 2014, in Chicago. AP

CHICAGO – Daredevil Nik Wallenda wowed Chicago and the world Sunday with two skyscraper crossings on a tightrope without a safety net or a harness.

Thousands of cheering fans packed the streets around the city’s Marina City towers to watch the 35-year-old, heir to the Flying Wallendas’ family business, complete the back-to-back walks, including one wearing a blindfold.

As he stepped from the wire after completing the second leg, he tore off his blindfold and waved to the crowd, who erupted in cheers.

The spectacle was telecast with a seconds-long delay on the Discovery Channel so producers could cut away if Wallenda fell.

It took him about six and a half minutes to walk the wire at a 19-degree incline from the Marina City west tower to the top of a building on the other side of a river.
“I love Chicago, and Chicago definitely loves me,” said Wallenda as he walked the wire, with the crowd of thousands below him screaming in support. “What an amazing roar!”

The next stage of Wallenda’s high-wire event he undertook blindfolded — a walk between the two Marina City towers, Chicago landmarks. He made the stretch in little more than a minute.

Residents of Marina City had been asked not to use laser pointers, camera flashes or drones that could interfere.

Two of his previous televised tightrope walks — over the brink of Niagara Falls in 2012 and across the Little Colorado River Gorge in 2013 — drew about 13 million viewers each.

Hours before the tightrope walk, Scott Jensen waited to watch the spectacle with his 15-year-old son, Matthew.

“I think anybody who does something like this is crazy, and it’s a once-in-a-lifetime opportunity to see it,” Scott Jensen said.

A year before Wallenda was born, his great-grandfather fell to his death during a tightrope stunt in Puerto Rico. He was 73.

“Life is on the wire,” Karl Wallenda once said. “Everything else is just waiting.”