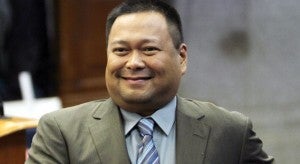 Binay’s allies, however, remain loyal to him, Ejercito said.

The Vice President’s camp recently launched the United Nationalist Alliance (UNA) as his political party for 2016, taking the name of the political coalition formed by several opposition parties in 2013.

Binay, UNA’s standard-bearer in the 2016 presidential election, is being investigated by a Senate blue ribbon subcommittee on charges of corruption during his term as mayor of Makati City.

He is also accused of amassing ill-gotten wealth, including a 350-hectare property in Rosario town, Batangas province, worth P1.2 billion.

Ejercito said the charges against Binay could have an impact on UNA’s recruitment. “Definitely, I have to be honest, I’m sure it will affect the recruitment somehow,” he said in a recent interview.

But if Binay would do well in future polls, politicians would still flock to his camp, Ejercito said.

Recent surveys showed a drop in Binay’s performance and trust ratings, though he still enjoys the highest numbers among government officials. Those polls also showed that he remains the top preference of voters for president.

“It well depends on the next surveys. If the trajectory is still the same, it will definitely have an effect. But if he is able to recover and [his numbers] stabilize—as of now, VP Binay is still the man to beat—it will be a different story,” Ejercito said.

Ejercito also said that despite the allegations against Binay, UNA remained intact. At present, he said, the group is not yet focused on recruitment.

“We’ve not been busy regarding that because elections are still a year and a half away,” he said.

Ejercito said he would rather focus on the country’s pressing problems first before devoting time to planning for 2016.

“We’re wasting so much time on politics this early when we should be talking about our pressing problems. The country has so many problems we should be focusing on, but what’s happening is the other way around—it’s politics, which has been covering for misgovernance,” he said.

Earlier, before the Senate investigation, UNA officials said many politicians were lining up to join Binay’s camp for 2016. Those clamoring to join UNA included members of the ruling Liberal Party, they said.

But UNA officials said they would rather officially take in new members near election time so as not to expose them to possible retaliation from the administration.