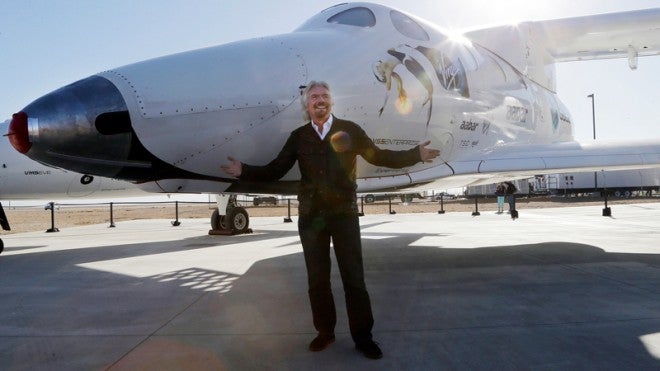 In this Sept. 25, 2013, file photo, British entrepreneur Richard Branson poses with SpaceShipTwo at a Virgin Galactic hangar at Mojave Air and Space Port in Mojave, Calif. The Virgin Galactic’s SpaceShipTwo space tourism rocket exploded Friday, Oct. 31, 2014, during a test flight, killing a pilot aboard and seriously injuring another while scattering wreckage in Southern California’s Mojave Desert, witnesses and officials said. Virgin Galactic would not say what happened other than that it was working with authorities to determine the cause of the “accident.” (AP Photo/Reed Saxon, File)

LOS ANGELES — Virgin’s pioneering tourist-carrying spacecraft crashed on a test flight in California on Friday, killing a pilot and scattering debris across the desert — and raising questions about the program’s future.

But Virgin chief Richard Branson, while voicing shock at the accident involving Virgin Galactic’s SpaceShipTwo, vowed to push forward towards the dream of space flight for the paying public.

“We’ve always known that the road to space is extremely difficult — and that every new transportation system has to deal with bad days early in their history,” he said.

“Space is hard — but worth it. We will persevere and move forward together,” he added in a statement issued as he refueled en route for Mojave.

Television images showed the wreckage of SpaceShipTwo, a test vehicle that flies to the edge of space, amid brush east of Mojave, a few hours’ drive northeast of Los Angeles.

The incident is the second disaster involving a US spacecraft this week, after an unmanned Orbital Sciences rocket carrying supplies to the International Space Station exploded after launch on Tuesday.

It is also a huge blow to British tycoon Branson’s long-held dream of offering the first passenger space flights, which have been snapped up by Leonardo DiCaprio and other celebrities.

The Virgin chief is due Saturday in Mojave, where the California Highway Patrol confirmed that one pilot had died and another was seriously injured and taken to hospital.

The spaceship had been carried aloft on a bigger aircraft known as WhiteKnightTwo and then released for a test of its rocket engine above the Mojave desert, the latest in a series of tests. 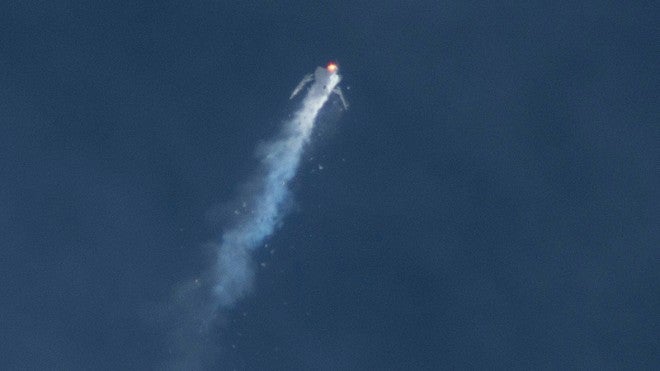 The Virgin Galactic SpaceShipTwo rocket explodes in the air during a test flight on Friday, Oct. 31, 2014. The explosion killed a pilot aboard and seriously injured another while scattering wreckage in Southern California’s Mojave Desert, witnesses and officials said. (AP Photo/Kenneth Brown)

Two minutes later, Witt said it became clear as he watched from the space port that something had gone wrong, even though there was nothing obvious visually from the ground.

“If there was a huge explosion, I didn’t see it,” he said. “From my eyes and my ears, I detected nothing that appeared abnormal.”

The National Transportation Safety Board air safety agency said it was sending a team to the site of the crash.

The flight — the 35th by SpaceShipTwo, according to Virgin Galactic’s Twitter feed — involved the same configuration as previously, although the type of fuel was new, officials said.

More than 500 people have already reserved seats — and paid a deposit on the $250,000 ticket price — for a minutes-long suborbital flight on SpaceShipTwo, which can carry six passengers.

The SpaceShipTwo’s first commercial flight — in which Branson and his family have vowed to travel — has been repeatedly delayed, but was tentatively forecast for the first half of 2015, before Friday’s crash.

DiCaprio and fellow actors Ashton Kutcher and Demi Moore are among those already reported to have booked their place.

Private companies are rushing to fill the gap left by NASA, which ended its 30-year shuttle program in July 2011 with the completion of the final Atlantis mission to the International Space Station (ISS).

Analysts said the accident is a huge blow to the nascent industry.

“It’s a setback for the tourism industry,” said Marco Caceres, an analyst and director of space studies for the Teal Group, a defense and aerospace consultancy just outside of Washington, DC.

“You are not going to see any commercial space tourism flight next year or probably several years after that,” he told AFP.

But Witt said the commercial space industry and all the young entrepreneurs working in it must move beyond the tragedy. 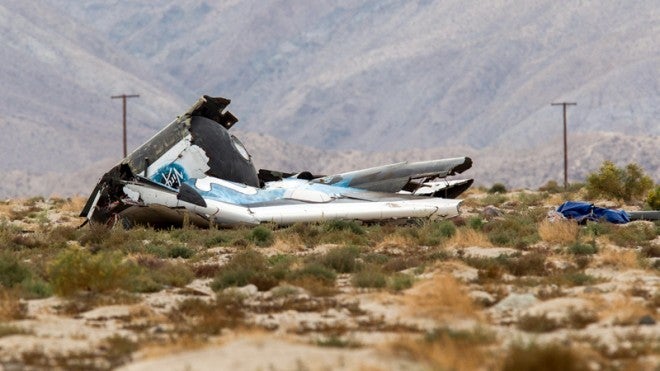 “My message to them is stay the course,” he said.

Virgin Galactic chief executive George Whitesides echoed the sentiment, saying: “We’re going to get through it. The future rests in many ways on hard days like these.”

NASA voiced shock at the crash.

“While not a NASA mission, the pain of this tragedy will be felt by all the men and women who have devoted their lives to exploration,” said NASA Administrator Charles Bolden.

“Space flight is incredibly difficult, and we commend the passion of all in the space community who take on risk to push the boundaries of human achievement.”

The show, which was commissioned last year, pits contenders against each other to win a flight on the Virgin Galactic spacecraft, according to entertainment industry journal Variety.

Initial investigations into the earlier Orbital Science rocket explosion centered on the pair of rocket engines providing its thrust, which were made during the Soviet era and refurbished.