Tiu to be probed for laundering VP’s money 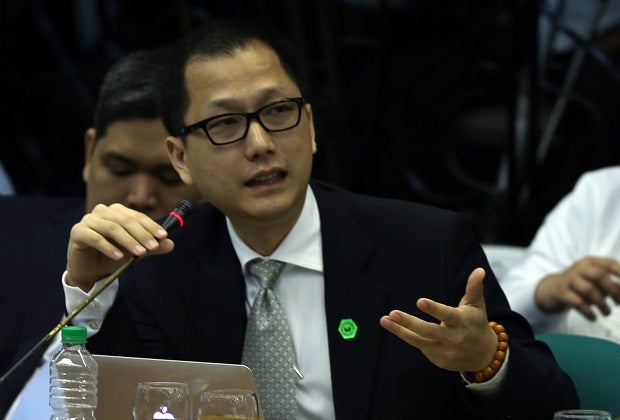 Sen. Alan Peter Cayetano has alerted authorities to the possibility that businessman Antonio Tiu could be laundering money for Vice President Jejomar Binay, saying they should be pursuing leads tending to point that way.

“It’s emerging that Mr. Tiu is not only a dummy of the Binays. There’s a possibility that he’s laundering money for them,” the senator told reporters after visiting inmates at Camp Bagong Diwa in Taguig City.

The agencies concerned should follow the paper trail of companies based in the British Virgin Islands infusing money into Tiu’s companies in the Philippines, Cayetano said.

He hinted that large sums of money allegedly being circulated by Tiu are coming from companies based in the British Virgin Islands, and that Binay’s lawyers had connections with these companies.

The British Virgin Islands, or BVI, is labeled by anticorruption campaigners as a “tax haven,” but more accurately is an offshore financial services industry giant where a large part of the world’s offshore companies are formed and based.

At Thursday’s hearing in the Senate, Cayetano told Tiu that it appeared that though most of his companies, including ANI, had been incurring losses they appeared to be awash in cash.

When told that ANI incurred a loss of P800 million in one year, Tiu explained that this arose from a “write-off of non-cash assets,” and was different from actual loss.

“I’m looking at the infusion of money, it’s all coming from you,” Cayetano said. “Money is also flowing in companies that you own.”

“There’s no doubt about the credibility of my foreign investors,” he said. He said this was fully disclosed, insisting that he was the majority owner of the companies.

Cayetano said this would be scrutinized in the next hearing.

Cayetano and Senators Koko Pimentel and Antonio Trillanes IV are leading a Senate blue ribbon subcommittee investigation into the allegedly overpriced Makati City Hall Building II that has expanded into an inquiry into the alleged corruption and ill-gotten assets of Binay, who is the former mayor of Makati and whose son is the incumbent mayor.

One of the alleged ill-gotten assets is a P1.2-billion, 350-hectare well-appointed agricultural estate in Rosario, Batangas province, which the senators and various witnesses claim is owned by Binay.

However, Tiu has come out in various media interviews and newspaper ads, as well as at the hearings, to claim ownership of a 150-hectare portion of the property through his Sunchamp Real Estate Devt. Corp. He claimed he paid a down payment of P11 million for the P440 million sale price of the 150-hectare property.

In the midst of the controversy, Binay has admitted to leasing only nine hectares of the farm where his wife operates an orchid farm.

The senators believe Tiu is either a dummy of Binay or is covering up for him.

“There’s a paper trail and we have other information that will come out soon, and other leads,” Cayetano said.

The senator said that a review of the financial records of Tiu and his companies being conducted by the Securities and Exchange Commission (SEC), the Philippine Stock Exchange and the Bureau of Internal Revenue could help unravel this alleged money laundering operation.

He said the Senate had earlier asked the Anti-Money Laundering Council (AMLC) to pursue these leads.

“We can’t ask them (the AMLC) to reveal the results of their investigation because this is confidential. But once they file a protection order in the court, they can disclose this,” he said.

“But I have good information that the links are being made. That’s why the earlier the Binays come out and the earlier they explain, the faster the investigation will be,” he said.

Herbosa said the SEC was in the process of reviewing and investigating the financial reports of the two publicly listed Tiu companies, Greenergy and ANI, to find if these were accurate.

“We have found some adverse findings, or some incomplete disclosures. We will be issuing notices of clarificatory conferences to company officers as well as the auditors,” she told the blue ribbon subcommittee.

Cayetano told Tiu that based on his own investigations into Tiu’s financial disclosures, “the money that you’re circulating comes from the outside.”

Trillanes followed this up with a statement that at the proper time, the subcommittee would disclose the details of Tiu’s alleged withdrawal of hundreds of millions of pesos from a bank in Quezon City.

“That will probably explain his money-laundering activities,” he said.

The senator yesterday confirmed that the committee is now validating confidential information on the alleged money laundering activities of Tiu.

“A lot of confidential information is being passed to us, and we’re validating this,” he said in a text message.

“We’re still gathering more evidence before we come out in public with it,” he said.

‘Our place in Batangas’