GOP senators urge Obama to hold off on immigration 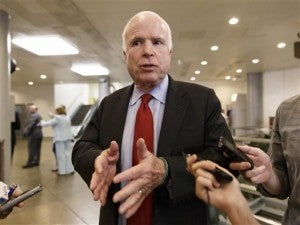 WASHINGTON — The three Republican senators responsible for comprehensive immigration legislation that remains stalled in Congress are calling on President Barack Obama not to use executive action to shield millions of people from deportation.

Sens. John McCain, Lindsey Graham and Marco Rubio wrote to Obama on Thursday urging him not to act and warning that unilateral action would undermine efforts to overhaul the immigration system. Rubio is a potential presidential contender in 2016.

Obama has said he would act after next week’s elections. That’s a delay from an earlier promise to move during the summer.

The three senators were members of the so-called Gang of Eight that worked for months on a bill to increase border security and provide a path to citizenship for the 11 million immigrants living in the U.S. illegally.