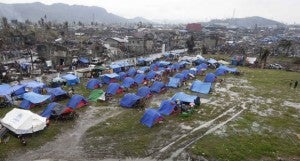 It took nearly a year for President Aquino to finally approve the government’s P167.8-billion recovery and rehabilitation plan for Eastern Visayas, which was devastated by Super Typhoon “Yolanda,” leaving more than 6,000 dead. AP FILE PHOTO

MANILA, Philippines–It took nearly a year for President Aquino to finally approve the government’s P167.8-billion recovery and rehabilitation plan for Eastern Visayas, which was devastated by Super Typhoon “Yolanda,” leaving more than 6,000 dead.

The plan was designed to rebuild the areas destroyed by the strongest typhoon ever to make landfall.

In a statement, Coloma said the PPAs “aim to restore” infrastructure, resettlement that should be “more resilient” to disasters, livelihood and the “resilience and capacities of communities in coping with future hazard events.”

Coloma said that of the P167.8 billion, P75.6 billion has been allotted for resettlement, P35.1 billion for infrastructure, P30.6 billion for livelihood and P26.4 billion for social services.

The Department of Budget and Management has released P51.98 billion from November 2013 to the present, sourced from the national budget.

Quoting Presidential Assistant for Rehabilitation and Recovery Secretary Panfilo Lacson, Coloma said the projects and programs were designed for the 171 affected cities and municipalities in 14 provinces and six regions that make up the “Yolanda corridor.”

“It is based on the principle of ‘build back better’ by focusing on long-term sustainable efforts to reduce vulnerabilities and strengthen capacities of communities to cope with future hazard events,” Coloma said.

On Nov. 8 last year, Yolanda brought torrential rains and more than 300-kph winds that wiped out towns and cities, leaving the Aquino administration scrambling to provide aid to thousands of hungry and traumatized survivors.

The impact of the super typhoon triggered a global relief and rehabilitation effort, including assistance from international nongovernment organizations.

The Aquino administration set up the Foreign Aid Transparency Hub (Faith) on the government website to track the foreign donations.

In a press briefing at Malacañang, presidential spokesman Edwin Lacierda said the Faith website is under maintenance as the government is “updating” it with additional data.

He added that the government would also identify the assistance sent in kind, primarily to the Department of Health and to local government units.

“We will be listing it all down in detail,” Lacierda said.

He said the Faith website would be up and running before Nov. 8.

Lacierda said details were not yet available on how the government would mark the first anniversary of Yolanda.