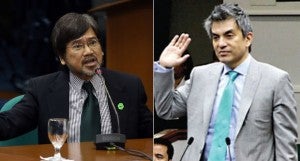 MANILA, Philippines–A Senate blue ribbon subcommittee on Thursday booted out two allies of Vice President Jejomar Binay who attempted to speak at its hearing on alleged corruption in Makati City even if they had not been invited.

Mercado denied being hospitalized to dispute allegations that Interior Secretary Mar Roxas of the ruling Liberal Party had visited him at the hospital when he was sick.

Mercado has also been unleashing allegation after allegation of corruption against Binay.

The UNA officials said a certain Ernesto Mercado was treated at University of the East Ramon Magsaysay Memorial Medical Center for heart ailment on Oct. 1 and Oct. 4, contrary to Mercado’s statement at an earlier hearing.

They wanted Mercado’s testimonies stricken off the records of the subcommittee, citing his earlier statement that he would take back all his statements if Binay’s camp can show proof of his hospitalization.

Sen. Alan Peter Cayetano said Tiangco and Bautista were gate-crashers at the hearing.

Cayetano brought attention to the two UNA officials at the start of the hearing Thursday. He asked whether Bautista was a resource person at the hearing, since the latter was seated at the table with the other invited speakers.

Sen. Aquilino Pimentel III, subcommittee chair, said he was not, and asked Bautista to take his proper place.

“We do not allow gate-crashing at this hearing, sir, and you’re not allowed to speak,” he said.

Bautista continued to speak, addressing the committee, and his mike was turned off.

Tiangco then approached the table where Bautista was seated and asked if he may be recognized.

But Cayetano said Tiangco was not a resource person as well. Tiangco should write to the committee if he wanted to speak, but he should not gate-crash, the senator added.

“He’s a congressman. He knows the rules of the Senate and the House [of Representatives]…. You cannot just raise your hand and come here if you’re not a resource person. You write a letter to us,” Cayetano said.

As a compromise, Pimentel called a brief recess to talk to the UNA officials.

He did not allow them to speak at the hearing. “They have not been invited as witnesses or resource persons,” he said.

But Pimentel added that the Vice President had been invited to the Nov. 6 hearing of the blue ribbon committee chaired by Sen. Teofisto Guingona III.