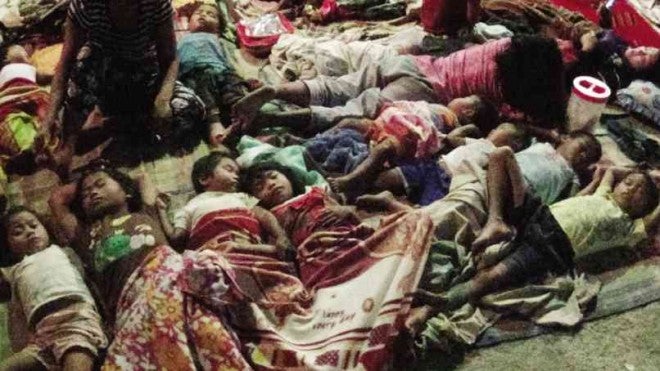 IN AN IMAGE as haunting as the tales of horror it portrays, children of the Manobo tribe in Surigao del Sur sleep on the ground in a gymnasium converted into a shelter after their families fled a series of armed attacks, killings and arson in their communities being blamed on a militia. PHOTO FROM KARAPATAN-CARAGA

DAVAO CITY, Philippines—More than 1,700 members of a tribal community in Surigao del Sur province fled their homes following a series of killings, attacks and arson of houses and schools in their communities.

Members of the Manobo tribe were forced to leave their homes when armed men came barging into homes, forcing residents out, shooting villagers without provocation and burning houses and schools.

One of the victims, Manobo leader Henry Alameda, had just finished breakfast at home on Oct. 24 in the village of San Isidro in Lianga town when armed men barged in and dragged him outside.

The armed men, allegedly government soldiers and members of a militia called Bagani led by Datu Calpet Egua, tried to carry him to a forested area but Alameda held on to a post of a waiting shed as he was being dragged. His wife and children cried for help. Alameda was shot in the chest and head.

Alameda was a council member of Malahutayong Pakigbisog Alang Sa Sumusunod (Mapasu), a tribal organization in Surigao del Sur, and had been vocal against mining operations in the Andap Valley complex.

Alameda had also campaigned against military operations in ancestral lands and against the pork barrel system.

Around 4 p.m. in the nearby town of Prosperidad, Agusan del Sur province, shots were fired at the house of Alejandro Dumaguit, the village chief of Barangay San Lorenzo.

Dumaguit was hit in the shoulder while his two children also suffered gunshot wounds. His son, Aldren, died after trying to save his father and sister.

Two hours later, soldiers and members of Bagani were also seen near the house of Genasque Enriquez.

Human rights group Karapatan said that a day before the attacks, Marcos Bocales, former commander of the militia Task Force Gantangan and the alleged right-hand man of Datu Egua, sent text messages and phoned leaders of Mapasu telling them it was time for him to “put holes in the chests” of the tribal leaders.

The displaced tribal people and farmers from Lianga and Prosperidad had sought shelter in a gymnasium in Barangay Diatagon.

Dr. Naty Castro, secretary general of Karapatan Caraga, also accused the military and Bagani of burning homes and schools in their path.

Castro said at least five houses suffered damages or were burned during the attacks.

In an e-mail statement, Enriquez, who is in hiding because of threats to his life, pointed to the military as being behind the attacks.

Capt. Jasper Gacayan, spokesperson of the Army’s 401st Brigade, admitted that there is an ongoing military operation in the area against communist guerrillas but denied that soldiers were involved in the attack on the Manobo communities.

“It will be very impossible for soldiers to do this,” Gacayan said.

“The military is adhering to international humanitarian laws. If any witness can help identify the perpetrators, we are willing to help,” Gacayan said.

Gacayan also confirmed the existence of Bagani but said it was not a militia but a group of tribal warriors formed by Egua to defend their territory.

He admitted, though, that the military had helped Bagani in some instances in the fight against the New People’s Army.

“We backed Bagani up because they are also victims of human rights violations and it is our mandate to protect communities from violence,” Gacayan said. Inquirer Mindanao