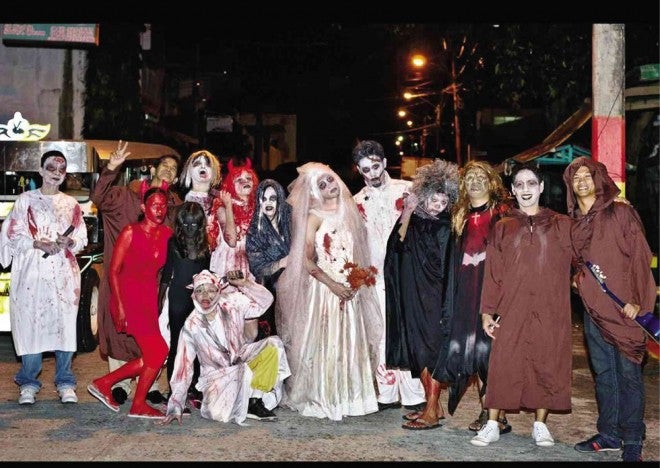 SARIAYA, Quezon—The dying Filipino tradition of ‘pangangaluluwa’ during the celebration of All Saints’ Day and All Souls’ Day is still alive in this bucolic town nestled at the foot of Mt. Banahaw.

In 2005, members of the Sariaya Tourism Council (STC) revived pangangaluluwa, the almost forgotten custom during the Halloween season, to raise funds for the local government’s belen festival in December and other tourism projects.

Pangangaluluwa, the Filipino version of America’s trick or treat, involves rural folk, usually youngsters, going house to house at night singing All Saints’ Day and All Souls’ Day ditties in exchange for cash.

Dedace, who is also a local historian and heritage protection advocate, said STC carolers usually hold the annual pangangaluluwa from Oct. 27 to 30.

Though most participants are dressed in macabre and ghoulish costumes, some members of the group also wear gowns rented from local fashion houses.

Dedace recalled funny incidents when some participants in Halloween costumes scare motorists and bystanders as they roam the town.

STC members sing and dance in front of houses of benefactors who had been notified in advance through letters of the solicitation drive.

Some, he said, “go to great lengths” preparing snacks for the participants.

Quoting a senior citizen, Gregoria Racelis Luna Vda. de Bitong, who was born in 1920, Dedace said the pangaluluwa was usually held on Nov. 1 when families return home from their cemetery visits.

At the stroke of midnight, children are awakened by elders and told to peep through windows to watch carolers draped in white blankets, representing departed souls, singing traditional hymns while asking for donations and prayers for the dead.

“The voices of the carolers are like coming from under the ground,” said Dedace, still quoting Luna.