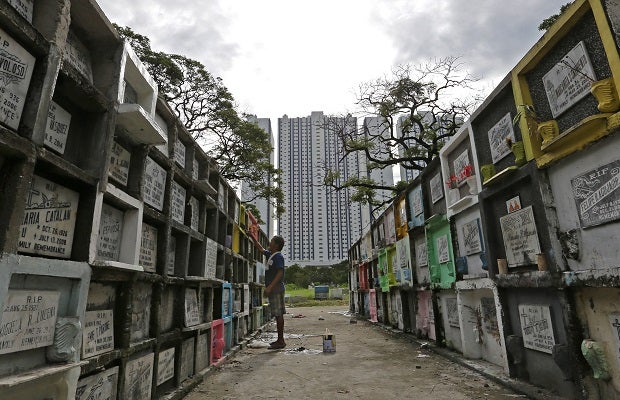 A caretaker of the Manila South Cemetery applies fresh cement to damaged apartment type tombs in preparation for the observance of All Saint’s Day. INQUIRER PHOTO/RAFFY LERMA

MANILA, Philippines—Beware of fake priests roaming around in cemeteries and columbaries   offering to perform prayers and blessings for the dead and soliciting money afterwards.

This was the warning of the Philippine National Poli‎ce Chaplain Service as the commemoration of the All Souls’ Day and All Saints’ Day approaches.

In an interview, Rosaroso said ‎these criminals usually strike during the All Souls’ Day and All Saints’ Day holiday when people flock to cemeteries and memorial parks to pay respect to their dead.

Rosaroso, who is also a Camp Crame priest, reminded the faithful that priests are not supposed to ask for a certain amount for performing a sacrament or even a blessing.

“We are only allowed to take donations or love offering. If a priest asks for money or stipend, that’s not a legitimate priest. That’s suspicious already,” he said.

To avoid dealing with cons, he advised the public to coordinate directly with churches to provide them priests authorized to perform Catholic rites.

“It would be offending for us if people would ask every time a proof that we’re really ‎priests,” Rosaroso said.

He also asked the public to be “careful” as some ‎criminals are good at “projecting themselves as priests.”

Some other gimmicks, the police recalled, were men pretending to be ‎priests and seminarians wearing religious habit asking people for solicitation and church collection.

“Some fake priests go to homes asking people to sponsor their trip to Rome. Be wary of that,” he said.

Rosaroso said these lawless elements may face a usurpation of authority complaint.