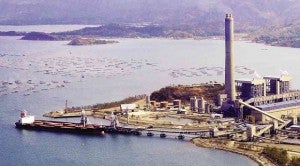 SUAL, Pangasinan—The Philippine Coast Guard (PCG) on Tuesday said it was issuing an inspection apprehension report (IAR) to the operator of a coal-fired power plant here for the oil leak in one of its facilities that may have contaminated Cabalitian Bay.

Ensign Roland Magdadaro, local PCG station commander, said the IAR will empower the PCG to investigate the oil leak that happened on Monday and determine if Team Energy, the plant operator, responded appropriately to the incident.

An IAR is a document issued by a PCG inspection and apprehension officer to a person who is apprised of a prima facie finding of a violation of laws, rules and regulations on marine pollution.

“As soon as we issue the IAR, Team Energy will be given 10 days to answer to defend itself. Then a formal investigation begins and most probably after about 30 days, it’s over,” Magdadaro said.

On Monday, a ruptured pipe in one of Team Energy’s two power generating plants released an undetermined amount of bunker fuel into the facility, some of which found its way to the plant’s outfall that flows into Cabalitian Bay.

An outfall is a drainage system that releases the sea water used to cool the power plant’s turbines back to the sea.

Team Energy’s head of external affairs, Froilan Gregory Romualdez III, said the leak was contained minutes after it was discovered. Bunker fuel, he said, is used to start up the plant’s engine to generate electricity.

Magdadaro said his team did not see traces of oil during an inspection around the power plant on Tuesday. But he said the lack of a visual trace did not mean that no oil was spilled into the bay.

He said the Department of Environment and Natural Resources had taken water samples to determine if there were oil traces in the water.

Residents of Barangay Pangascasan here, where the power plant is located, were on the coast on Tuesday for a cleanup activity.

“We are picking up the small rocks and plastic garbage that have traces of oil,” said Evelyn Acuña, a barangay (village) utility worker.

On Monday, she said, pools of oil were floating on the water near the shore, which is just outside the power plant fence.