‘Jennifer’ photo with tongue sticking out made public 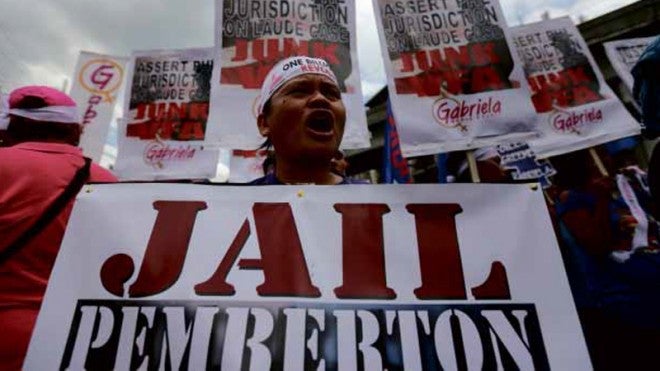 JAIL PEMBERTON Members of the women’s group Gabriela hold a rally on Chino Roces Bridge (formerly Mendiola) in Manila to demand that the government junk the Visiting Forces Agreement with the United States and jail US Marine Pfc. Joseph Scott Pemberton, the suspect in the murder of transgender Filipino woman Jeffrey “Jennifer” Laude. JOAN BONDOC

MANILA, Philippines–The family of Jeffrey “Jennifer” Laude on Tuesday made public photographs of what it described as the “grotesque” manner in which the transgender Filipino woman died and blamed the Visiting Forces Agreement (VFA) for the violent death.

During a seminar on international law at the University of the Philippines in Quezon City, the family’s lawyer, Harry Roque, showed a photo of Laude slumped on the toilet bowl of a hotel in Olongapo City and another close-up of her swollen face with the caption “The VFA did this.”

“Her tongue was sticking out from suffering.

“To those who say that the issue of VFA is separate from the issue of the killing, we beg to disagree. The VFA is the very reason why we have not even conducted any police investigation on Pemberton. His fingerprints and DNA have not been taken, his body has not been subjected to physical examination. The VFA is the reason we don’t have the basic evidence,” Roque said.

Roque said the picture also showed that there was “extreme cruelty” and that’s why the case should be murder and not just homicide.

“What happened to my child was extremely painful. What right did he have to do this to her?” Laude’s mother, Julita, said, referring to suspected killer US Marine Pfc. Joseph Scott Pemberton.

Tearful and impassioned, Julita slammed President Aquino for protecting Pemberton. “We haven’t heard a word from you! You have no heart! You did not even bother to show up!” Julita cried.

“The family decided to go public with this picture in order for the nation to understand not just the grief that they have been feeling but the sense of anger over the injustice that, not only having failed to exercise jurisdiction over the person suspected of murder, the table has been turned against the family and the fiance,” Roque said.

The German fiancé, Marc Sueselbeck, was prevented from leaving on Sunday to face deportation proceedings with the possibility of being banned from returning in the country after the Armed Forces of the Philippines filed a complaint against him for climbing over the fence of the Joint US Military Assistance Group compound and shoving a Filipino guard who tried to stop him.

Sueselbeck and Laude’s sister Marilou said they were trying to get a glimpse of Pemberton in detention.

The German apologized after the incident but the AFP rejected it and asked the immigration bureau to declare him an undesirable alien.

“It was lawbreaking. It was probably troublemaking. But it was not a crime. It was a very stupid thing and I’ve expressed regret from that point on. Is it worth a lifetime sentence for me, for the family, for Jennifer?” said Sueselbeck, who filed a motion for voluntary deportation on Tuesday.

Sueselbeck feared he would not be able to visit Laude’s grave if he was blacklisted. “This will not just hit me in the most brutal and hardest way, but it would also hurt the family,” he said.

Roque said Laude’s family would also file a complaint in the Bureau of Immigration (BID) against Pemberton. Roque said the BID should also confiscate Pemberton’s passport and demand his appearance on the BID premises.

“Let them explain why under the VFA, a killer cannot be compelled to appear before the BID. Let them tell the people why an agreement exists that prevents Pemberton from being dealt with in the exact manner that they’ve dealt with a German national who pushed a Filipino soldier,” Roque said.