Tourist arrivals drop due to Mayon 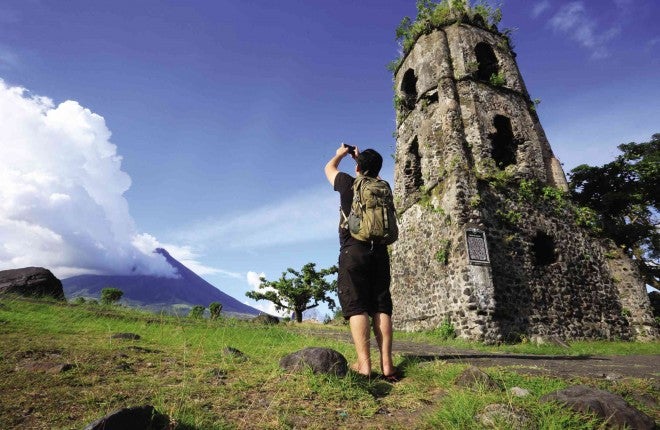 LEGAZPI CITY, Philippines—Tourists arrivals dropped significantly in Albay province, hurting the local economy, amid reports of a possible hazardous eruption of Mayon Volcano, according to the Department of Tourism regional office.

A drastic cut in the number of visitors has been expected in the Cagsawa Ruins, deemed the No. 1 tourist destination in the province, from 200 a day before Sept. 15—when Alert Level 3 was raised over Mayon—to less than 100, especially on weekends.

Joven Cerdenia, park attendant, said, tourists could be counted on the fingers of his hands and most them were locals. If this situation persists, it will be hard to attain its income projection of P3.5 million by the end of the year, he added.

Even operators of all-terrain vehicles, or ATVs, that bring tourists to the foot of Mayon have felt the pinch.

“As of now, we are down by almost 70 percent on sales,” said ATV operator Marti Calleja. September is normally a peak season in tourist arrivals, but the threat of an eruption scared away tourists, he said.

Because of the crunch, Calleja has retrenched 50 percent of his employees.

In Legazpi City, tourism officer Joan Jamisal said two national conventions scheduled for this year were canceled. These events were expected to bring 5,000 visitors to the city.

Arrivals to the capital were down by 14 percent in September compared to the same period last year, or from 43,612 to 37,901, Jamisal said.

The Albay Public Safety and Emergency Management Office (Apsemo), which is tasked with handling disaster management in the province, is seeking the creation by Congress of a Mayon Commission that will provide long-term solutions whenever the volcano becomes restive.

“The local government unit (LGU) can’t completely address this without legislation,” said Cedric Daep, Apsemo head. Any LGU cannot really meet the standards in disaster response since it has only a limited fund, he added.

He said the proposed Mayon Commission would be responsible for concerns, such as the permanent relocation of residents. Through it, funds would be allotted by the government to acquire and develop land for the displaced families and to provide livelihood for them.

Earlier, Gov. Joey Salceda said the provincial government would need P600 million to buy around 12,000 hectares of land inside the 6-kilometer-radius permanent danger zone (PDZ) and buy lots for the permanent relocation of residents.

If the provincial government pushes through with its plan to relocate 27 schools within the PDZ, nearly 12,000 students will be affected.

Ramon Fiel Abcede, regional director of the Department of Education, said 11,845 students would be displaced if residents were not allowed to return to their houses inside the zone once the Philippine Institute of Volcanology and Seismology lowers Mayon’s alert level to 2.