Security to be tightened, road work to stop before holidays 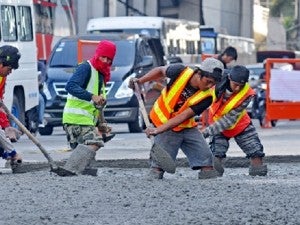 Workers from the Department of Public Works and Highways (DPWH). INQUIRER FILE PHOTO

MANILA, Philippines–The Department of Public Works and Highways (DPWH) has directed all contractors with ongoing projects to suspend all road excavation activities, and to clear the roads of construction barriers and equipment before the All Saints’ Day break.

Also in preparation for next weekend’s holidays, the Philippine National Police (PNP) will deploy “road safety marshals” on major thoroughfares and streets leading to cemeteries.

In an advisory, the DPWH over the weekend also called for the brief suspension of government road projects for the duration of the public holidays.

The department instructed its district engineers to “coordinate with contractors and project engineers of the United Project Management Office in rescheduling public infrastructure projects.”

“They should also start removing construction barriers and idle equipment on site that may obstruct and affect the traffic flow,” he said.

This, he said, “will ensure better and safer travel of motorists and commuters.”

From Oct. 30 to Nov. 3, the agency will activate its “Lakbay Alalay,” or travel assistance program along national roads nationwide.

Under the public service program, DPWH personnel will be ready to respond to “road emergency situations” in coordination with the PNP, Land Transportation Office and local government units.

The PNP itself will field marshals from the Highway Patrol Group (HPG) to assist motorists and commuters expected to go home to their provinces to visit cemeteries and memorial parks where their loved ones are buried.

The marshals will be deployed until the vacationers return home from their respective provinces.

PNP spokesman Senior Supt. Wilben Mayor said the PNP would also set up public assistance centers to be manned by the local police and the HPG.

“The entire PNP will be placed on full alert to provide maximum coverage and public safety services, which is what we always implement during holidays and special events,” Purisima said.

Thousands of Metro Manila residents are expected to flock to bus terminals and other transport hubs before the weekend. In Metro Manila, large cemeteries like the Manila North and South cemeteries usually have huge numbers of visitors.

Mayor said unit commanders had been instructed to plan their assistance strategies for physically disabled visitors in cemeteries and terminals.

“They will need more attention from our public servants for them to feel safer and more secure as they visit their departed ones,” the spokesperson said.

Purisima said the PNP would not be neglecting its intelligence, counterintelligence and police operations to preempt terrorist and criminal activities.

Regional police commanders have been directed to provide security coverage to power plants, telecommunication relay stations and other vital installations.

“They will implement active defense against communist terrorists or rebels who might attack lightly defended installations,” Purisima said.