During Revilla’s bail hearing on plunder on Thursday, Atty. Leigh Von Santos said Cavite Representative Lani Mercado-Revilla’s Nature Concepts Development and Realty Corp. did not have any legitimate business from 2007 to 2012.

Santos said this indicates that the company was used to launder money.

“One of the indicators that Nature Concepts is a dummy corporation is that it has no legitimate business and is being used only for money laundering,” Santos told the court. 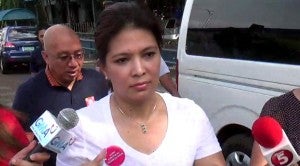 “Nature Concepts has no operations since 2007 to 2012, yet large amounts have been deposited,” he added.

Santos had said that despite having no operations and an insubstantial capital, the company received at least P27.745 million, the bulk of which were deposited close to the dates Revilla supposedly received his alleged kickbacks through his aide and co-accused Atty. Richard Cambe.

Santos had also said both Revilla and his wife transferred to the company at least P16 million.

The AMLC investigator, however, said Revilla never used “aliases” to hide his identity in his 81 bank accounts under the AMLC inquiry.

For his part, Revilla’s lawyer Joel Bodegon said Nature Concepts does not have substantial capital because it was only a starting company.

He added that Nature Concepts could not be a dummy because it expressly identified Mercado-Revilla as owner.

(It can’t be a dummy because Cong. Lani’s name is registered there. It has legal and legitimate transactions. How can it be a dummy?)

He said the Securities and Exchange Commission did not even delist Nature Concepts despite having insubstantial capital.

Revilla, meanwhile, insisted that he earned his bank deposits legitimately as an actor.

(I have made over a hundred movies with all of them probably making money. None of my movies have flopped. The money that I have which was mentioned in this court, I earned from legal means.)

(Where can you see a dummy corporation with Lani’s name on it? Does she look like a dummy?)

In a report submitted to the court, AMLC said Revilla deposited P87.6 million in his and immediate family members’ bank accounts from April 6, 2006 to April 28, 2010.

This was the same period that that Revilla, through his aide and lawyer Richard Cambe, received kickbacks from his projects funded by his Priority Development Assistance Fund (PDAF), as alleged by principal whistleblower Benhur Luy.

The AMLC also said Revilla closed these bank accounts at the height of the scandal.

The AMLC, however, clarified that they only investigated his alleged unexplained wealth, excluding the income Revilla earned as a movie star and product endorser.

Revilla is detained at the Philippine National Police Custodial Center as he faces plunder for his alleged involvement in the pork barrel scam, the purported scheme of using public funds to ghost projects for kickbacks purportedly masterminded by Janet Lim-Napoles.

Bong Revilla on ‘hidden wealth’: I earned it as one of highest paid actors in PH