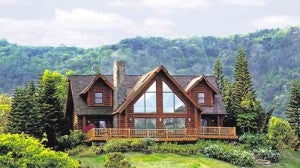 TAGAYTAY HIGHLANDS LOG CABIN  An official of the company that developed the upscale Tagaytay Highlands where Vice President Jejomar Binay allegedly bought a P15-million log cabin on Wednesday said that the firm had no copy of the check in the amount of P3.12 million as down payment. PHOTO FROM TAGAYTAY HIGHLANDS WEBSITE

MANILA, Philippines–An official of the company that developed the upscale Tagaytay Highlands where Vice President Jejomar Binay allegedly bought a P15-million log cabin on Wednesday said that the firm had no copy of the check in the amount of P3.12 million as down payment.

“The document you showed me does not appear in our records so I cannot comment on that,” Belle Corp. vice chair Willy Ocier said of the P3.12-million check allegedly received by SM Prime Holdings chair Henry Sy Jr. from Gerardo Limlingan, alleged to be a dummy of Binay.

Belle, a property and gaming investment firm, is majority-owned by the Sy family, which has accumulated shares in the company over the years. Belle, however, is run as an independent organization and not consolidated into the Sy family’s flagship SM Investments Corp.

“Moreover, the document you showed appears to be a private transaction and we have no personal knowledge of it,” Ocier said.

“I must also emphasize that we are precluded by law from disclosing personal information,” he added in a text message.

Ocier said there was “no log cabin in his (Binay’s) name.”

Documents furnished by former Makati Vice Mayor Ernesto Mercado showed that Binay not only made the down payment in 1997 when the Vice President was mayor of Makati for a three-bedroom log cabin but also the monthly payments.

Ocier said VP Binay “is and has been a Tagaytay Highlands country club member since 1994.”

Ownership of club shares in Tagaytay Highlands is separate from ownership of log cabins or any residential-resort unit in the estate.

At the Senate blue ribbon subcommittee hearing on the corruption allegations against Binay, Mercado on Wednesday presented more evidence to support his contention that the Vice President owned a P15-million log cabin in Tagaytay Highlands, which came out in the Inquirer on Wednesday.

He explained that to use the facilities of exclusive clubs like Tagaytay Highlands, one has to have a unit there. In such places, cash is not paid and members or their families just need to sign receipts. The bill is sent to the member every month.

The camp of the Vice President on Wednesday said that he and his family did not own any property or log cabin in Tagaytay Highlands as claimed by his accusers in the Senate inquiry into corruption allegations against him.

Remulla said that a check of the records showed the Binays did not own or lease units in Tagaytay Highlands.

But he said that Binay would rent units whenever they would take a break.

No record of ownership

Remulla said he did not know how many times the family rented units there.

He also disclosed that Binay was a member of the country club and this was reflected in his statement of assets, liabilities and net worth under shares of membership in Tagaytay Highlands.

Remulla dismissed the presentation of evidence of Mercado and lawyer Renato Bondal showing Binay’s ownership to the property.

“A billing statement is not proof of ownership as claimed by Mr. Mercado, especially when the authenticity of the signatures can be disputed,” Remulla said.

“Until now, Mr. Mercado cannot provide documents proving actual ownership and the company mentioned has already denied having any records of ownership,” he said.

Read Next
Naia contractor ordered to end ‘bag quota system’
EDITORS' PICK
Smart celebrates all kinds of ‘#SimplyLove’ for Pride Month
WATCH: INQside Look with Fil-Am actress Aina Dumlao
SWS: Over 12M Filipinos still jobless as of May 2021
SANTIS Delicatessen: The road to survival is sweet and savory
Smart brings KCON:TACT especially 4U to subscribers from June 19 to 27
Dizon: 40 of 119 ‘Build’ projects done by 2022
MOST READ
William Martinez sometimes feels his kids ‘don’t remember’ him anymore
Landmark tale of corruption
ICC case vs Duterte may take 3 months in pretrial body
Dizon: 40 of 119 ‘Build’ projects done by 2022
Don't miss out on the latest news and information.