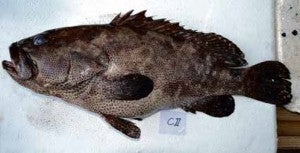 LAPU-LAPU COUNTRY There are at least 27 lapu-lapu
(grouper) species in the Philippines, of which six are “vulnerable” or “near-threatened.” CONTRIBUTED PHOTO

MANILA, Philippines–The expensive lapu-lapu (grouper) that we export to Hong Kong may be good business, but the traders may be signing the death papers of an already threatened species, according to molecular biologists.

A “molecular inventory” conducted by Central Luzon State University (CLSU) in Nueva Ecjia shows that there are at least 27 lapu-lapu species in the Philippines, of which six are “vulnerable” or “near-threatened.”

Apolinario V. Yambot, head of CLSU’s Biotechnology and Analytical Laboratory Project, said the study involved the first time that DNA fingerprinting and barcoding was used in identifying lapu-lapu in the Philippines.

The research project, which focused on “commercially important” groupers in the country, was conducted in partnership with the Department of Agriculture’s Biotechnology Program.

Yambot, who was the study’s lead scientist, said in an interview that most of the identified species included groupers belonging to Epinephelus (large sea fish), Cephalopholis (aquarium fish) and Plectropomus (species of leopard coral grouper, spotted coral grouper and black saddled coral grouper).

Yambot said previous studies of identifying lapu-lapu species may be inaccurate because these relied on mere appearance rather than molecular characteristics.

“Through the database that we came up with based on the study, we found that some species that fish growers thought were not available locally were, in fact, thriving in our waters,” Yambot said.

He cited as example the humpback grouper. He said one fish farmer told him that humpback fingerlings had to be imported from Indonesia.

“But in our study, we found the humpback thriving in the waters of Davao, Zamboanga and Cebu,” Yambot said.

“More importantly, six species, including the humpback grouper, are cited as ‘vulnerable’ and ‘near-threatened’ on the International Union for the Conservation of Nature’s Red List of Threatened Species,” he added.

Yambot said this meant that the humpback grouper should no longer be traded. Even then, the market is lucrative, with a kilo fetching some P2,000.

“We hope that the relevant authorities would take notice of our findings and be able to take the necessary steps to protect what needs to be protected,” said the DNA characterization expert.

Yambot said results of the study were highly relevant in implementing and enhancing efficient assessment and inventory of aquatic resources with high economic value for domestic consumption, trade and, most importantly, management for conservation.

The findings become more important considering that the economic potential of the grouper industry has created more fishing pressures, overexploitation and depletion of high-value fishes, he added.