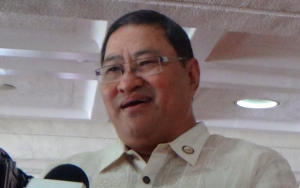 MANILA, Philippines – The House of Representatives energy committee will no longer rush the approval of the resolution granting President Benigno Aquino III emergency powers to address the looming power shortage in 2015.

During a hearing on Monday, panel chairman Oriental Mindoro Representative Reynaldo Umali said the panel will target approving the resolution before December, from its original plan on October 29.

Umali, however, said the resolution will not include as an option renting generator sets to resolve the power shortage .

“We hope to approve the joint resolution in the House before December 1… We will still approve (the President’s request for emergency powers), but the provision regarding the rental of generator sets will no longer be there,” Umali said at the sidelines of the hearing.

Lawmakers questioned the need to rush the President’s proposed emergency powers after the admission by an energy official that there is no power crisis in 2015.

DOE Assistant Director Irma Exconde said the agency is anticipating a shortage in reserve power because of the expected power plant outages and the demand for power.

Exconde said the reserve shortfall translates to only one-hour rotating brownouts once a week based on the calculation of the National Grid Corporation of the Philippines (NGCP).

Bayan Muna Representative Neri Colmenares said the official practically admitted that the country will face a reserve crisis and not a power supply crisis.

He then scored Energy Secretary Jericho Petilla for pushing for the emergency powers when there is no power crisis in the first place.

“Everybody is saying of imminent power crisis but all the while supply is greater than demand. The DOE must be put to task for alarming the public…” Colmenares said.

Manila Representative Sandy Ocampo also scored the DOE for its slow pace in informing the chamber on the actual figures on the power shortage.

“Until now, we are still in determining the figures… Moving forward, we should be sure of it already,” Ocampo said in Filipino.

President Aquino has asked Congress to grant him the authority to contract additional capacity precisely to address the looming power shortage during the summer, as granted to him under the Electric Power Industry Reform Act (EPIRA).

EPIRA allows emergency powers to the President “upon the determination by the President of the Philippines of an imminent shortage of the supply of electricity.”

Petilla had said the agency is expecting as much as 900 MW shortage for Luzon in 2015, and that the President must contract at least 300 MW of the total shortage.

The agency had said the thinning power supply may be due to the looming El Nino phenomenon, the maintenance shutdown of the Malampaya power plan, increased or continuing outages of power plants, and the delay in commissioning of committed power projects.

The energy department had told the committee that at least P9 billion will be needed to purchase gensets and P6 billion to rent gensets.

Another option to resolve the power crisis is through the Interruptible Load Program (ILP).

This is to give way for the other customers who may need the power than the commercial users. The businesses are also required to contribute their excess energy reserves. But the program is only voluntary, and thus government cannot compel businesses to participate.

Instead of immediately granting Aquino’s request, the leadership in the House of Representatives sought an inquiry in aid of legislation on the need to contract additional power.