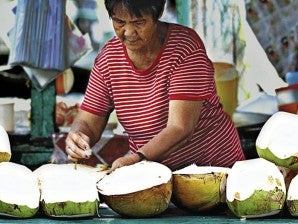 NATURAL PACKAGING. Coconut vendors in Lucena City expect brisk business after President Aquino noted after his arrival from the US on Friday that fit-conscious Americans are going cuckoo over coco water. DELFIN MALLARI JR./INQUIRER SOUTHERN LUZON

Lucena City—Will they finally be in the money?

Coconut vendors here are hoping for brisk business as a result of renewed media interest in the salutary effects of “buko” juice.

“We hope the news will bring us more customers,” Roberto Belen, 63, a vendor of young coconuts and buko juice, told the Inquirer on Saturday.

Belen and his wife have been tending to their makeshift coconut stall at the corner of Cabana and Merchan streets here for the past 20 years. It is the favorite pit stop of health buffs.

“Buko juice after a morning exercise is best for the body,” said jogger Rod Ravina, 43.

He sipped the coconut water with a plastic straw and took the scraped meat home.

Returning on Friday from his official visit to the United States, President Aquino announced that two US companies wanted to make fresh investments in the Philippine coconut industry to meet the international demand for coconut water.

According to the President, coconut water is now a $100-million industry in the United States where it is being promoted as an alternative natural sports drink because it contains the essential electrolytes and minerals needed for rehydration.

“It is a natural and safe diuretic. Urinating is easy and refreshing if one is a regular drinker,” said office worker Alfredo Manalo, 39, who regularly buys three glasses of the stuff from his favorite vendor.

But coconut vendors such as Belen are not exactly thrilled by the reported interest of American investors in buko juice.

He expressed apprehension that the renewed interest of foreign businessmen in the coconut would result in a shortage in the local market: “All of our coconuts will be shipped to the US and other countries. Where will we get coconuts for our local needs, for our fruit salad during fiesta and special occasions?”

Belen said he and his wife were now buying coconuts mostly from faraway farms because their usual sources in neighboring towns had been converted into subdivisions and other farms had become barren because of the rampant trade in coconut lumber.

He said they were selling an average of 100 coconuts daily, mostly to early-morning health buffs.

But during the holiday season, they can sell more than 500 young coconuts a day, he said.