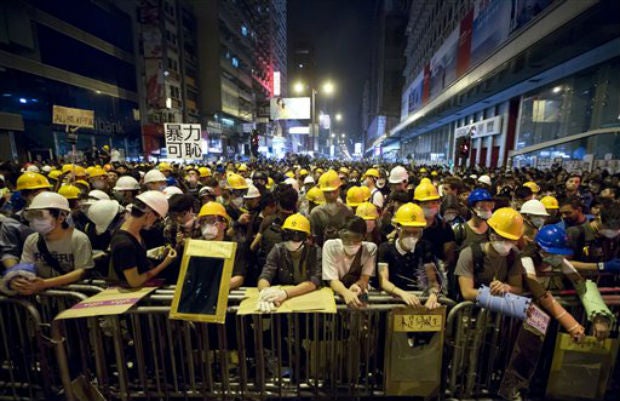 Protesters stand guard behind a barricade at the occupied area in the Mong Kok district of Hong Kong, early Monday, Oct. 20, 2014. Pro-democracy protesters accused police of using excessive force against them after violent clashes in Hong Kong, as a senior politician said weeks of rallies have reached a “critical moment.” AP

HONG KONG–Pro-democracy protesters on Sunday accused police of using excessive force against them after violent clashes in Hong Kong, as a senior politician said weeks of rallies have reached a “critical moment.”

Police blamed radical activists for stirring up trouble after dozens of officers in riot gear pushed into a crowd of angry demonstrators in the Mongkok district early Sunday, striking at them repeatedly with batons.

Twenty people were injured in a fourth night of clashes between protesters demanding free elections for the semi-autonomous Chinese city, and police trying to restore traffic to the major Mongkok thoroughfare which they have brought to a standstill.

The spike in violence comes after three weeks of largely peaceful pro-democracy rallies and road blockades that have paralyzed key parts of the Asian financial hub.

At a press conference at the Mongkok camp on Sunday, organizers blasted police for a response that left some demonstrators with head wounds, fractures and bruising, with others carried away on stretchers.

“If this goes on, one day there may be someone who loses his life or gets seriously injured–then the situation in Hong Kong will get out of control,” said activist Lam Cheuk-ting.

But police insisted they had used appropriate force against protesters who attempted to charge their cordon lines, pushing back with the umbrellas that have come to symbolise Hong Kong’s democracy movement.

“Activists from radical organizations as well as troublemakers are mingling with other protesters,” said police spokesman Steve Hui.

“From time to time they plan, organize and direct various actions to provoke our officers and create chaos,” he said.

He said four people were arrested between Saturday night and Sunday morning. Also held was a 23-year-old man who used the Internet to incite others to join the Mongkok protest and to paralyze the railways, Hui said.

Talks between student protest leaders and government officials are still set to go ahead on Tuesday despite the clashes. But with little common ground, there are slim hopes of a breakthrough.

China insists that candidates for the 2017 vote for Hong Kong’s leader must be approved by a pro-Beijing committe –a condition which the protesters dismiss as “fake democracy.”

But Hong Kong’s current leader Leung Chun-ying has warned that Chinese authorities have no intention of caving in to the protesters, whose rallies come as one of the biggest challenges to Beijing’s authority since the Tiananmen pro-democracy protests of 1989.

Although the crowds have shrunk from their peak of tens of thousands at certain times earlier in the month, protesters still occupy key roads in a city usually known for its stability.

Finance secretary John Tsang said Sunday the protests had reached a “critical moment” and urged the demonstrators to retreat.

“I was young before and I have taken part in various student movements,” he wrote on his blog.

“Retreating is not an easy decision. It takes a lot of bravery. I still believe that you can take the courage to make right decisions at this critical moment.”

Some protesters at Mongkok on Sunday wore hard hats and makeshift protective gear fashioned out of household items including baby mats. Posters stuck around the camp read: “Calm down. Don’t forget our original purpose.”

The government information service said 20 people involved in protest activities had been injured between 10pm and 6am overnight Saturday to Sunday–but would not specify how many were demonstrators or police, or the extent of the injuries.

One volunteer medic said she had seen four people with head injuries with “serious bleeding” as well as a back fracture.

“They hit us without any reason when we were standing behind the roadblock. I was hit by a police stick four or five times,” said 30-year-old protester Jackie, as he sat at a local hospital with his head bandaged and blood on his T-shirt.

“There was no aggressive action on our side.”

Hong Kong’s police force traditionally pride themselves as being “Asia’s finest,” but their reputation has taken a battering since they used tear gas against the protesters on Sept. 28, with images of the chaotic street battles beamed around the world.

The latest surge in violence comes after video footage emerged last week showing plainclothes officers beating a handcuffed protester as he lay on the ground.

A former British colony, Hong Kong was handed back to Chinese rule in 1997 under a “one country, two systems” deal that guarantees freedoms not seen on the mainland. But fears have been growing that these liberties are being eroded.–Dennis Chong