ROCHESTER, New Hampshire — James Foley was a compassionate and capable journalist who tried to see the good in people, friends said Saturday at a memorial for the New Hampshire man beheaded by Islamic State group extremists.

Hundreds of people filled Our Lady of the Rosary Church on Saturday in Rochester during a Mass to celebrate his life on what would have been his 41st birthday. Afterward, friends and family paid poignant tribute to Foley. 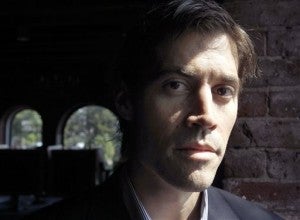 In this Friday, May 27, 2011, file photo, journalist James Foley poses for a photo during an interview with The Associated Press in Boston. Foley was abducted in Syria on Thanksgiving Day 2012, and a video by Islamic State militants that purported to show his killing by the militant group was released Tuesday, Aug. 19, 2014. AP

“There seemed to be two absolutes in Jim’s life — his faith and his family — both of which gave him an incredible foundation,” said longtime friend Jeremy Osgood. “It was a wealth of strength and courage for Jim in his time of need.”

Osgood became friends with Foley while growing up in Wolfeboro, in New Hampshire’s bucolic lakes region. Foley was a thoughtful student, a “smiling, wide-eyed boy” and good athlete who excelled in soccer, Osgood said.

Foley was also a student of human nature who had a knack for reading people and could blend into any group or situation.

“The wonderful thing about Jim is he used the ability to build up people and not tear them down,” Osgood said. “Whether you knew him for 30 years or 30 minutes you would consider him a friend.”

Foley was abducted in Syria in November 2012 and hadn’t been heard from since until a video showing his killing was posted on the Internet in August. Members of the Islamic State militant group said they killed him and other foreigners because of US intervention in the conflict in Iraq and Syria.

Since his death, his family has created the James W. Foley Legacy Fund to support reporters in conflict zones and the families of American hostages as well as promote a global conversation about how governments can handle hostage crises.