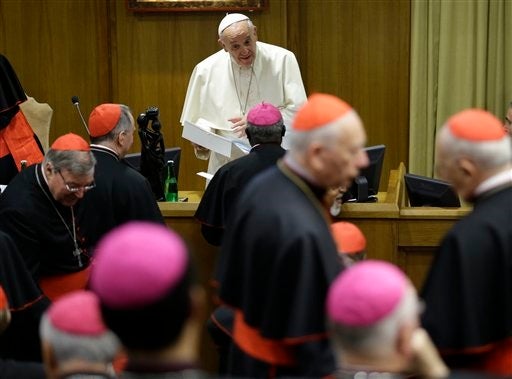 Pope Francis talks to prelates as he arrives at the morning session of a two-week synod on family issues at the Vatican, Saturday, Oct. 18, 2014. AP

VATICAN CITY— Catholic bishops predicted widespread approval in a vote Saturday evening of a revised document laying out the church’s position on gays, sex, marriage and divorce, saying the report was a “balanced” reflection of church teaching and pastoral needs.

The final report of the two-week meeting of bishops was rewritten to incorporate amendments to a draft released earlier in the week which had shown an unprecedented openness toward gays and Catholics who live together without being married.

Conservatives had harshly criticized the draft and proposed extensive revisions to restate church doctrine, which holds that gay sex is “intrinsically disordered,” but that gays themselves are to be respected, and that marriage is only between a man and woman.

Cardinal Raymundo Damasceno Assis of Brazil, Cardinal Oswald Gracis of India and Cardinal Gianfranco Ravasi of Italy, the Vatican’s culture minister, said they all would approve the revised text and that they expected the majority of their fellow bishops would do the same.

They said the document was “balanced,” ”positive” and “open.”

At the same time, though, some hot-button issues weren’t settled and will be put off for further discussion, he said. The bishops will meet again next year to close out the debate.

The draft report had signaled a radical shift in tone, saying gays had gifts to offer the church and their partnerships, while morally problematic, provided gay couples with “precious” support. The church, it added, must welcome divorced people and recognize the “positive” aspects of civil marriages and even Catholics who live together without being married.

The proposed amendments to the draft were nearly unanimous in insisting that church doctrine on family life be more fully asserted and that faithful Catholic families should be held up as models and encouraged rather than focus on family problems and “irregular” unions.

The bishops signaled a similar tone in a separate message directed at Christian families released Saturday. There was no mention whatsoever of families with gay children, much less gay parents, and it spoke of the “complex and problematic” issues that arise when marriages fail and new relationships begin.

“Christ wanted his church to be a house with the door always open to welcome everyone, without excluding anyone,” the message read. (Oddly, the English translation was less welcoming than the official Italian, ending the sentence after ‘everyone.’)

Cardinal Wilfrid Fox Napier of South Africa, who helped draft the revised final report, told Vatican Radio the final document showed a “common vision” that was lacking in the draft.

He said the key areas for concern were “presenting homosexual unions as if they were a very positive thing” and the suggestion that divorced and remarried Catholics should be able to receive Communion without an annulment.

He complained that the draft was presented as the opinion of the whole synod, when it was “one or two people.”

“And that made people very angry,” he said.