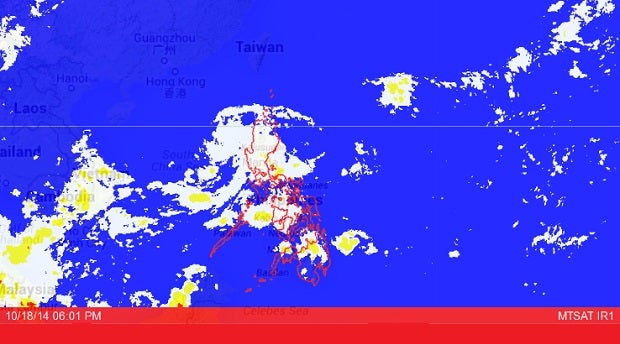 MANILA, Philippines—The weather bureau warned residents of Central and Southern Luzon on Saturday of heavy rains that could trigger flash floods and landslides because of the tail-end of a cold front affecting these two areas.

The Philippine Atmospheric, Geophysical and Astronomical Services Administration said that Nueva Ecija, Aurora and Quezon provinces should brace for cloudy skies with moderate to heavy rainshowers and thunderstorms.

Senior forecaster Jori Loiz explained that the tail-end of a cold front is the point of convergence of the “amihan” or northeast monsoon and easterly winds — a meeting of hot and cold air that causes precipitation or rain.

“Currently the tail-end of the cold front is over Southern Luzon but it is expected to move lower in the next few days,” Loiz said.

Other parts of Central and Southern Luzon, including the Bicol region, the rest of Calabarzon and Central Luzon, and the Mindoro provinces as well as Marinduque and Romblon, and Metro Manila are expected to be cloudy with light to moderate rainshowers and thunderstorms.

The forecaster also advised fishing boats and other small vessels against venturing out to sea off the northern and eastern seaboards of Northern Luzon where strong to gale-force winds are expected.

Larger vessels are alerted to waves that could reach up to 4.5 meters off the coasts of the Batanes, Calayan and Babuyan groups of islands, Ilocos Norte, Cagayan and Isabela provinces.

According to Pagasa’s forecast for Sunday, with the amihan prevailing over Northern Luzon, the Ilocos, Cagayan Valley, and the Cordillera Administrative region, and the rest of Central Luzon will have cloudy skies with light rains.

The rest of the country will be partly cloudy to cloudy with isolated rainshowers or thunderstorms.