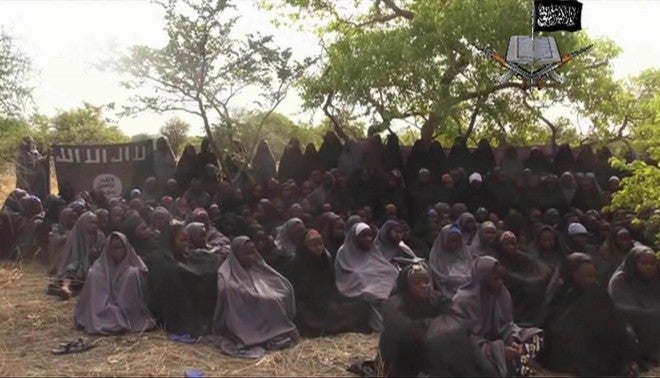 This as he welcomed the “good news” that Nigeria and Boko Haram have agreed to an immediate ceasefire that could end an insurgency that has killed thousands and left hundreds of thousands homeless in Africa’s most populous nation.

Hollande told a news conference in Paris that the girls’ release “could happen in the coming hours and days.” France has been involved in negotiations that led to the release of several of its citizens kidnapped by Boko Haram in Cameroon.

But Nigerian Defense Ministry spokesman Major General Chris Olukolade said the fate of the schoolgirls is being negotiated.

Neither Hollande nor Nigerian government officials gave any details.

Boko Haram negotiators “assured that the schoolgirls and all other people in their captivity are all alive and well,” Mike Omeri, the government spokesman on the insurgency, told a news conference.

The chief of defense staff, Air Marshal Alex Badeh, announced the truce Friday and ordered his troops to immediately comply with the agreement.

“Already, the terrorists have announced a cease-fire in furtherance of their desire for peace. In this regard, the government of Nigeria has, in similar vein, declared a cease-fire,” Omeri said.

But there was no immediate word from Boko Haram, which limits its public engagement to video announcements by its leader, Abubakar Shekau. Last year, when a government minister charged with negotiations announced an agreement, the group quickly published a video with Shekau denying it. He said at that time that whoever the government negotiated with did not speak for him, and that he would never talk to infidels.

The United States, which had sent a team including hostage negotiators to help free the girls, said it could not confirm a ceasefire. “We cannot independently confirm that at this point,” deputy spokeswoman Marie Harf told a news conference in Washington.

Boko Haram — the group’s nickname means “education is sinful” — drew international condemnation with the April kidnapping of 276 girls and young women at a boarding school in the remote northeastern town of Chibok. Dozens escaped in the first couple of days, but 219 remain missing.

It could take days for word of a cease-fire to get to fighters of Boko Haram, which is broken into several groups. They include foreigners from neighboring countries Chad, Cameroon and Niger, where the insurgents also have camps.

Omeri confirmed there had been direct negotiations this week about the release of the abducted girls. Another official said the talks took place in Chad with Danladi Ahmadu, who was identified as the Saudi Arabia-based secretary general of Boko Haram. The official spoke on condition of anonymity because he is not authorized to talk to reporters.

But two people involved in previous negotiations with the extremists said they had never heard of Ahmadu. Both spoke on condition their names were not published because of the sensitivity of the issue.

Doubts also were expressed on Twitter by Ahmad Salkida, a Saudi-based Nigerian journalist living in self-exile because of his links with top leaders of Boko Haram.

Salkida suggested the ceasefire announcement was a political ploy as President Goodluck Jonathan prepares to announce he will run again for the presidency in February elections. Boko Haram leaders are “miffed,” Salkida tweeted, that people are being “easily encased in deceit.”

The chief government negotiator, Ambassador Hassan Tukur, said the Boko Haram representatives he had talked with had provided bona fides by freeing hostages.

In an interview with the BBC, Tukur said Boko Haram had promised to release Chinese construction workers kidnapped in Cameroon and the wife of a vice prime minister of Cameroon. Cameroon announced Octpober 11 that 27 hostages, including 10 Chinese and the Cameroonian official’s wife, had been released.

“They promised us … they would release (them) … And they have done so,” Tukur said on BBC radio.

Boko Haram had been demanding the release of detained extremists in exchange for the girls. Jonathan originally said he could not countenance a prisoner swap.

The original #BringBackOurGirls protest movement in Abuja, Nigeria’s capital, called for confirmation of the truce from the president.

The principal of the school from which the girls were abducted, Asabe Kwambura, had mixed feelings about the news. “If what we hear is true, I will the happiest person in the world to see these girls of mine return home in one piece,” she told The Associated Press.

“But many of us are still forced to doubt government” she added, saying the girls should long have been rescued.

Dozens more schoolgirls and boys, young women and men have been kidnapped by the extremists in a 5-year-old insurgency.

Jonathan told the United Nations last month that the extremists have killed 13,000 civilians. Hundreds of thousands have been driven from their homes, many of them farmers, causing a food emergency in the northeast of the country where the insurgency is centered.

In August, Boko Haram began seizing and holding territory where it declared a caliphate, apparently copying the Islamic State group fighting in Iraq and Syria.

But the tide appears to have turned in recent weeks, with the military wresting some towns from the extremists and reporting to have killed hundreds of Boko Haram fighters.