In Cebu City, judiciary keeps going but amid the heat | Inquirer News

In Cebu City, judiciary keeps going but amid the heat 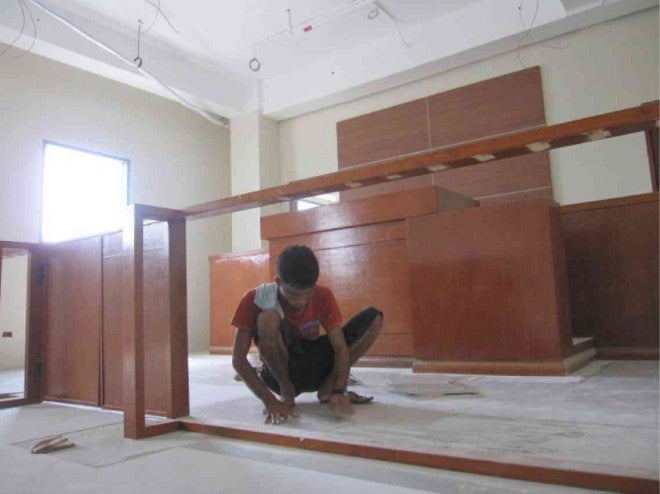 A CONSTRUCTION worker puts on the finishing touches on one of the courtrooms at Qimonda IT Center in Cebu City. Judges and court employees are set to transfer to the newly constructed courtrooms next month. ADOR VINCENT MAYOL

Court employee Arturo Batoctoy keeps two extra shirts in his office drawer. “Sweat often dries up on my body,” he said, explaining the extra precaution he has taken after recently suffering from bronchitis.

Batoctoy, 52, a process server of the Regional Trial Court (RTC) Branch 9, attributed the illness to the hot and humid conditions inside Cebu City’s temporary courthouse at Qimonda IT Center near the North Reclamation Area.

The center houses all 30 trial courts in the city after the Palace of Justice was badly damaged and deemed “unfit for occupancy” by the 7.2-magnitude quake that shook Cebu and neighboring Bohol province on Oct. 15, 2013.

A year after the catastrophe, judges and court employees are still occupying the ground and second floors of Qimonda, a six-story commercial building with glass windows but without air-conditioning units, except for the third and fourth floors where partitioned courtrooms are being set up.

To provide ventilation, building officers have opened a few windows, while court employees have brought in electric fans and air coolers.

“We’re trying to endure the very warm temperature. In fact, I had to remove my T-shirt every time I look for court records inside the storage room because it’s really very hot here,” Batoctoy said.

The construction of offices and courtrooms is set to be completed next month. “As soon as it is finished, we’ll transfer there,” RTC Executive Judge Soliver Peras said.

Presently, the 22 RTCs take turns in conducting hearings inside 11 temporary courtrooms on the ground floor. “Some courts will have hearings only in the morning while others have to do it in the afternoon. But at least, we’ll have hearings every day,” Peras said.

Some judges set up their own courtrooms in areas reserved for them and their staff.

Chances are dim for the judiciary officers and their staff members to return to the Palace of Justice, which was built in 1982 and conveniently located between the Capitol’s executive and legislative buildings.

According to the Office of the Building Official, it is not structurally sound, so what we plan to do is retrofit it, spend money because we need more office space,” he had told reporters in an interview.

“We are lacking office space here in the Capitol due to the increase in the number of our employees. Even our records cannot be housed here anymore,” Davide said.

Only the prosecution and PAO offices have stayed behind, occupying the ground floor, despite warnings of structural flaws.

Regional State Prosecutor Fernando Gubalane said the judiciary was still looking for a site for the new prosecution offices.

While Davide offered another lot at the Department of Agriculture regional offices in Barangay Guadalupe for the new “judicial complex,” the Supreme Court is not likely to take it. It is looking at an alternative one at South Road Properties (SRP) in Cebu City, Court Administrator Jose Midas Marquez said during a visit to Cebu in August.

“A study is being conducted to house all courts in Cebu City at SRP. The committee [on the Hall of Justice of the Supreme Court] would want to know what’s needed and how much resources we need for that,” Marquez said, referring to the lot donated by the city government to the Court of Appeals (CA) Cebu Station.

If plans push through, he said, the new complex would house the CA Cebu Station, the RTCs and the MTCCs.

A “climate-proof and green” courthouse is being envisioned. Solar panels may be installed to cushion the effects of extreme weather conditions caused by climate change, Marquez said.

“Cebu City’s judicial complex should be a model showcase, not just for the Philippines but for the world,” he said.

Earlier, Senate President Franklin Drilon vowed to help seek funding for the project. But he said only half of the P1 billion needed could be considered in next year’s national budget.

Drilon asked Davide and Vice Gov. Agnes Magpale to submit the funding request through a provincial board resolution so the Department of Budget and Management may include it in the 2015 budget.

“Hopefully, we can transfer them to the upper floors, which are air-conditioned,” he said.

Judge Ramon Daomilas of RTC Branch 11 said the present situation had, in a way, affected the resolution of cases. “I personally have to deal with the noise from the trucks that pass by Qimonda every time I go over court records,” he said.

Once in a while, his staff members and court employees from other branches would go back to the Palace of Justice to retrieve old court records.

“Our current situation is not easy. But we don’t have any other choice. We need to serve the public,” Daomilas said.

“If a court employee gets sick, then he or she just need to take a leave. The judges have innovative ways of addressing the warm temperature inside the building,” he said.

With his own money, Daomilas bought an exhaust fan. Other judges and employees purchased electric fans.

Chief Justice Maria Lourdes Sereno inspected Qimonda early this year and told the judges that the high court would refund their expenses for the transfer and the office equipment they would purchase to address the heat.

In the meantime, court personnel have no choice but to bear the working conditions.

One employee, Aileen Pacayra, said she had been experiencing headaches and cough since the transfer.

“We get sick more often. I don’t like the smell of cement and paint. We’re just trying to endure everything. We could not afford to stop working,” she said.