McDo back in Tacloban one year after ‘Yolanda’ 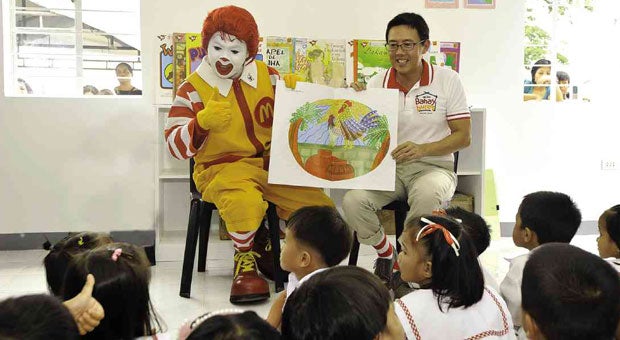 TACLOBAN CITY, Philippines—The McDonald’s branch here reopened Thursday ahead of the first year anniversary of the world’s strongest typhoon that made landfall in this city.

To make the reopening of the McDonald’s branch more meaningful, McDo Bahay Bulilit, which is actually a day-care center, was inaugurated at San Jose Central School in San Jose district.

Kenneth Yang, president and chief executive officer of McDonald’s, said that the fastfood chain’s officials and personnel were happy that they were now back “serving” the people of Tacloban and nearby areas after Super Typhoon “Yolanda” (international name: Haiyan) barreled its way through Eastern Visayas on Nov. 8, 2013.

The building of McDonald’s branch here was damaged due to storm surges spawned by Yolanda.

The branch, located on Rizal Avenue, is just a few meters away from the seaport of Tacloban. Repairs started in September and ended just last week.

“We are happy to be back here in Tacloban after what happened here,” Yang said in an interview.

He said that McDonald’s decision to reopen its branch in Tacloban was a testament of its confidence in the city’s economy after it was battered by Yolanda, which killed more than 6,300 people and left 1,061 missing.

In fact, Yang said, McDonald’s was thinking of opening another branch in the city.

Caroline Andrade, the McDonald’s franchisee in the city, said that she was overwhelmed with the response of the people during the branch’s reopening.

“Of course, we are happy that our people continue to patronize McDonald’s. We never thought of not reopening again because we know we have already developed loyal customers,” said Andrade, whose branch in the city first opened in 2002.

Andrade lamented that the branch lost P40 million because of Yolanda.

Yang, together with Andrade and Councilor Cristina Gonzales-Romualdez, presided over the inauguration of McDo Bahay Bulilit in San Jose Central School located in Barangay 87, San Jose district, the worst-hit area.

Yang said that with the construction of Bahay Bulilit, day-care children would now have their new and spacious school room.

McDo Bahay Bulilit, the 25th built by one of the world’s most popular fastfood chain restaurants, has a floor area of 80 square meters and is equipped with reading materials and books, tables, chairs and ceiling fans.

Three-year-old Maria Nina Nicole Francisco said that she was glad that the daycare looked “beautiful and big.”

“Thank you to them,” she said, referring to the McDonald’s personnel.

At the launching, the children listened to Ronald McDonald as he read aloud the story of “Ang Mahiyaing Manok” (The Shy Rooster).

Popular heartthrob Matteo Guidicelli, an endorser of McDonald’s, said that he was happy to be with the children.

“They were all smiling,” he said.

Read Next
Free breast screenings in Muntinlupa City
EDITORS' PICK
SM continues to send relief assistance to remote towns in Batangas
‘A greener, cleaner tomorrow’: A how-to guide for Filipinos who want to help with today’s energy crisis
Get exciting deals and discounts when you download the new McDonald’s App
5-year-old Chinese boy in Cebu tests negative for novel coronavirus
China expands lockdowns to 25M people to halt viral outbreak
DOH: Second person ‘under investigation’ for 2019-nCoV in Tacloban City
MOST READ
No time for revelry; Tagaytay instead plans for alert level 5
Palace: US Senate move also made Duterte junk VFA
Virus scare: 600 Chinese from Wuhan must leave PH by Jan. 27
Duterte on Trump: He’s nice, I won’t curse him
Don't miss out on the latest news and information.

End US-PH PACT for ‘right reason, not out of spite,’ Duterte told