HONG KONG—Hong Kong’s embattled leader made a dramatic u-turn Thursday reopening his offer of talks with student protesters a week after the government abruptly pulled out of discussions aimed at ending more than a fortnight of mass democracy rallies.

The offer by Chief Executive Leung Chun-ying came a day after video footage of plainclothes officers beating a handcuffed demonstrator as he lay on the ground sparked widespread anger.

“Over the last few days… we expressed a wish to the students that we would like to start a dialogue to discuss universal suffrage as soon as we can and hopefully within the following week,” Leung told reporters.

But question marks remain other whether fresh talks can make any substantive headway in the stalemate between the government and protesters.

Leung warned that Beijing had no intention of rescinding its insistence that his successor be vetted by a loyalist committee before standing for election in 2017 — a core demand of protesters.

“Politics is the art of the possible and we have to draw a line between possibilities and impossibilities,” he said.

The Asian financial hub has been rocked by mass rallies for nearly three weeks calling both for full democracy and Leung’s resignation.

Ongoing sit-ins at three major intersections have caused significant disruption to a city usually known for its stability.

Protesters have called Beijing’s proposal a “fake democracy” and have vowed to remain on the streets until their demands are met despite growing impatience among some Hong Kongers and attacks by pro-government thugs.

City authorities pulled out of talks with the Hong Kong Federation of Students (HKFS) — one of the groups leading the ongoing protests — last Thursday plunging the city into a political stalemate it shows little sign of emerging from.

The offer of new talks came after a two day spike in violence between police and protesters as they battled over a series of barricades near the government’s besieged headquarters.

“If any individual officer is suspected of using excessive force, police will investigate it in a just and impartial manner,” senior superintendent Kong Man-keung told reporters.

The man who was beaten had been arrested after he threw an unknown liquid from a height onto multiple officers, Kong added.

Tensions soared after the video was released on Wednesday with protesters saying they had lost all faith in the police.

Leung refused to be drawn on the allegations against the officers, stating: “We should not politicise this incident.”

The incident has become another public relations disaster for the police who were severely criticised for firing tear gas on umbrella-wielding protesters on September 28 in a move that attracted worldwide attention.

Amnesty International and the United States both called for a swift investigation of the officers.

Leung also refused Thursday to rule out further barricade clearances by police that led to the recent uptick in clashes with protesters after two weeks of comparative calm.

“We cannot allow the negative affect on Hong Kong to continue because of the blockage of these streets. Police will use appropriate methods at the appropriate time to handle this problem,” he said.

After weeks of largely ceding control to protesters at three main sites, police have begun probing demonstrator defenses in the last few days, tearing down some barricades, sparking running battles.

Renewed clashes between police and protesters broke out in the early hours of Thursday over a contested road near Leung’s offices.

Officers used pepper-spray against defiant demonstrators who shouted chants accusing the police of links to criminal triad gangs — but the flurry of violence was brief compared to the night before which saw some of the worst confrontations since the protests began.

Leung, who has kept a low profile throughout the last week, had been due to attend a question and answer session at the city’s parliament but cancelled his appearance after “security and risk assessments”.

He spoke to the media Thursday at his official residence which, unlike his office, is not surrounded by protesters.

Patience with protesters is running short in some quarters, with shop owners and taxi drivers losing business and commuters voicing irritation at disruptions and delays.

The South China Morning Post, the city’s most prominent English daily, on Thursday called on protesters to vacate the streets, saying there was little chance of Beijing conceding to their demands.

“The campaign may end in a manner that no one desires. It is perhaps time the protesters considered retreating and reviewing their strategy,” the paper said in an editorial, effectively throwing its weight behind the government. 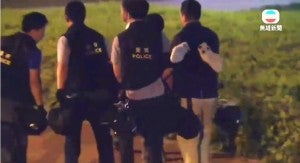