MANILA, Philippines—There’s another “viral” photo of a Quezon city policeman going around online—this time, it’s a positive one.

The subject of the Facebook post is Project 4 policeman, SPO1 Ariel Camiling, of the QCPD Station 8, who helped a stranded couple with their stalled vehicle along the northbound lane of Edsa last Saturday.

In the photos posted by motorist Joann Angeles Delos Santos on Oct. 11, Camiling was shown patiently tinkering with the couple’s engine.

Delos Santos narrated that Camiling and another policeman, who were aboard a nearby police mobile, approached her and her husband after the couple had spent more than two hours stuck near the Gate 4 of Camp Aguinaldo on Saturday. 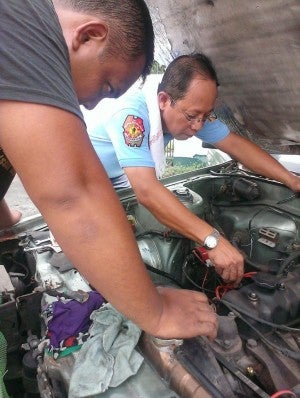 “We [were in] a rush to be home this morning as it [was] our children’s family day at school,” Delos Santos said, in her post.

Adding to Delos Santos’ stress were tow-trucks who were already “pestering” the couple to avail of their services.

“Several minutes after, one of the two policemen approached us to ask what’s wrong. I was so frightened that he might give us a ticket and force us to be towed … He checked the car, and he found what caused the problem—the contact point in the distribution assembly broke. Good thing we have a spare!” Delos Santos narrated.

“So [Camiling] guided my husband in replacing it and adjusted the installation until the car went live again. He stayed with us to make sure that everything was alright,” Delos Santos said.

“We offered him a small amount for ‘merienda’ but he turned it down. I took the liberty to snap some candid pictures while he was fixing our car as he may not allow me to do it once he’s done,” Delos Santos said.

Delos Santos said she believed Camiling deserved a commendation, for being a “selfless and generous police officer,” so she started circulating his photos.

“In the middle of controversies involving our police force these days, I want to inform and share to all Filipinos that there truly are government personnel and officials that still do good, who go beyond their duties without asking for anything in return,” Delos Santos said, in Filipino.

Newly installed Quezon City Police District (QCPD) director, Senior Supt. Joel Pagdilao, has already taken notice of Delos Santos’ post, and has given Camiling a pat on the back on Wednesday.

“In these times…that the PNP organization faces some negative criticisms, it is heartening to have policeman like SPO1 Camiling who has shown a remarkable display of deeds worthy of emulation by all in the police service,” Pagdilao said, in a statement.

“SPO1 Camiling, who is already in the police service for 31 years, truly lives by our motto as the Quezon City’s Pride,” Pagdilao added.

Quezon City cops carry crosses to atone for their sins

QC cop gets medal for act of kindness