‘Why Binay’s ratings fell: Truth is out; no conspiracy’ | Inquirer News

‘Why Binay’s ratings fell: Truth is out; no conspiracy’ 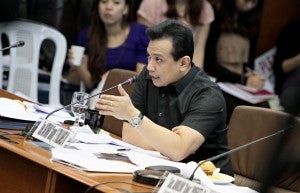 MANILA, Philippines–Vice President Jejomar Binay’s public satisfaction rating is down, not because of an “elaborate plan to destroy him,” but because “he’s a corrupt public official after all,” Sen. Antonio Trillanes IV said on Tuesday.

“You cannot fool the people. They’re intelligent enough to discern what is true and not,” the senator told the Inquirer in a phone interview.

“If his numbers are down, it’s not because there is an elaborate plan to destroy him. It’s because of the truth—that he is a corrupt public official after all. You can quote me on that.”

Binay’s net satisfaction rating went down by 15 points, from 67 in June to 52 last month, based on the latest Social Weather Stations (SWS) survey conducted from Sept. 26 to 29.

Despite the drop, 70 percent of the respondents said they were satisfied with Binay’s performance, still the highest rating among top government officials included in the survey.

“We would expect them to be present,” he said.

The next hearing is also expected to be a face-off between Trillanes and businessman Antonio Tiu, whom he accused of fronting for Binay in a 350-hectare property in Batangas province.

Tiu has denied the allegation, saying he was “engaged in legitimate business here and abroad primarily in agriculture.”

“I made my fortune through sheer hard work and my determination to succeed. If we really want to count the number of farmers we have been providing jobs and markets, it will run into more than 100,000.”

Trillanes said he would bring out in the next hearing pieces of evidence purportedly showing that Tiu was indeed Binay’s dummy.

In a text message to reporters, Justice Secretary Leila de Lima Tuesday insisted on the agency’s right to investigate impeachable government officials, including the Vice President but excluding the President, saying the results of the probe can later be used to initiate an impeachment case.

De Lima on Monday said she was considering whether to order the National Bureau of Investigation to look into the corruption allegations involving Binay. She was supposed to meet Tuesday with whistle-blowers already provisionally admitted to the government’s Witness Protection Program but the meeting was canceled for an unknown reason.

The Binay camp claimed that the Vice President, like the President, was immune from suit and that Binay could not be impeached for something that he allegedly did before he was elected Vice President.

Asked if Binay, after the investigation, could be charged in a regular court and then imprisoned during his term as Vice President, De Lima replied, “I won’t go that far. It’s a gray area. It really depends on how the criminal court concerned will interpret the provisions of impeachability vis-a-vis impeachable officials who are not immune from suit.”

She explained that the principle of immunity from suit applies only to two entities, the State and the President. Among government officials, only the President is immune from suit, De Lima said.

According to her, impeachability refers only to the mode of removal, not to immunity.

De Lima said the NBI probe, should she order it, would be “fact-finding in nature, more specifically, to validate/verify the veracity or truthfulness” of the allegations of former Vice Mayor Ernesto Mercado and other whistle-blowers.

“Are their exposés true, or mere lies as asserted by the Binay camp? Isn’t it that we should determine the truth not only about the alleged overpricing of the Makati parking building but the other [alleged anomalies] exposed by Mercado and others?” she asked.