MANILA, Philippines—Senator Antonio Trillanes IV  strongly denied on Tuesday  owning  eight  luxury  cars, saying  he only had a second-hand 1996 Nissan Terrano which he sold to bankroll his senatorial bid in 2007.

“The allegation of UNA that I owned eight luxury vehicles enumerated in their press release is a blatant lie. In truth, what I owned was a second-hand 1996 Nissan Terrano, which could not be considered a luxury vehicle. I sold the said vehicle in 2007 to help finance my senatorial campaign,”  Trillanes said in a statement.

Trillanes was  reacting  to the United Nationalist Alliance’s (UNA) statement that he owned eight  luxury vehicles — which  included two Sports Utility Vehicles (SUVs), five vans, and a big motorcycle–when he was a Navy lieutenant second grade. 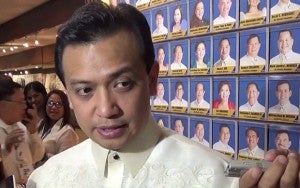 UNA spokesman JV Bautista said  the  luxury cars  were not included in the senator’s statement of assets , liabilities, and  net worth  (SALN).

But  Trillanes  said UNA’s claim was a “baseless and desperate move”  by Vice President Jejomar Binay’s camp to divert attention from the corruption allegations  being   hurled  at him.

“It is apparent that VP Binay’s camp is trying to revive an old issue, which has been already dismissed by the Office of the Ombudsman and the Makati Court. This matter was raised at the height of GMA administration, when the CIDG filed cases against us, including this issue, due to Magdalo’s corruption exposés against the said administration,” he said.

GMA is  former President and  now Pampanga Representative Gloria Macapagal-Arroyo while CIDG is Criminal  Investigation  and Detection  Group of the Philippine National Police.

“The cases regarding the alleged vehicles were dismissed because the documents the CIDG submitted in support of its allegation were found to be spurious,”   said the senator.

Trillanes then  answered point by point the issue  raised  by the opposition  group regarding the eight  luxury vehicles   that he allegedly owned.

“I have never ever owned a Kawasaki motorbike. In fact, I have never driven and I do not know how to ride a motorbike, not even once in my life. My license restriction can easily prove this fact,”  he said.

“As for the Pajero with license plate RIZ-222, the true owner thereof, a certain Darlito Roca, operations officer of Lydia’s Lechon, has surfaced to claim and acknowledge his ownership (of the car),” said the senator.

The five Delicas, Trillanes said, are owned by his mother, a businesswoman, who bought those vehicles from the proceeds of a P2-million loan she obtained from a bank in October 2000.

“Delicas were second-hand vans bought in Subic and are not luxury vehicles. In fact, they can be bought in lots for as low as P100,000 to P150,000 each. The intention was to operate a van rental service using these vehicles. These old vehicles, however, proved too costly to maintain. Hence, my mother opted to sell and dispose some of them,”  he said.

“The very idea that I would buy five vehicles of the same model and make for my personal use is quite absurd and illogical. My mother’s van rental business was duly registered with the Department of Trade and Industry under her name and was properly stamped and licensed by the Caloocan City Hall,” he pointed out.