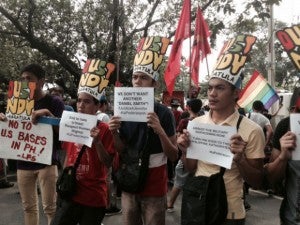 MANILA, Philippines – Police blocked protesters on Tuesday as they tried to penetrate the embassy of the United States of America along Roxas Boulevard in Manila.

Around 50 members from the League of Filipino students, Anakbayan, and Kapederasyon stormed the US embassy calling for the junking of the Visiting Forces Agreement (VFA) and the Enhanced Defense Cooperation Agreement (Edca.)

The protesters shouted “US troop, out now!” and “Junk, junk VFA!” as they tried to get through the police line but failed to get past the 70- strong police from the Manila Police District.

The rally came after the brutal killing of a Filipino transgender allegedly by a US Marine in Olongapo City on Saturday.

US ships held back amid Filipino’s killing