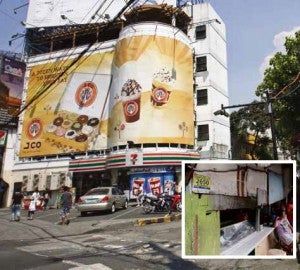 MANILA, Philippines–The cafeteria is like any other, except that it is on the eighth floor of the 22-story Makati City Hall and purportedly run by Cups & Mugs Kitchenette, owned by someone said to be a front for the Binays.

The air-conditioned canteen can accommodate around 150 customers and has a glass-paneled window on one side that shows a panoramic view of the Pasig River.

It is five tables wide and five tables long. Six customers can be seated at a table. The usual range of food from rice meals to desserts, such as fruit salad and bread selection, was on display.

Service crew, who stood behind the counter to receive customer orders, were clad in plain white top and pants covered by a black apron. However, no name tag or patch could be found on the crew’s uniform that would identify the company.

Asked who was managing the canteen, the supervisor took time to answer and could only say that a private concessionaire owned it. She referred to the head of the concessionaire as “boss.” She hesitated to give contact details of anyone from the canteen.

In contrast, it was a completely different story over at the Ospital ng Makati (OsMak) since no cafeteria can be found in its building on Sampaguita Street, Barangay (village) Pembo, Makati City.

Employees and visitors eat outside the premises, either at the nearest carinderia or fast-food outlets in the vicinity, according to the security guards, a nurse and a janitor.

True enough, groups of doctors were seen eating their lunch at Chiqui Grill House, a small eatery, across from the main entrance of OsMak.

Former Makati Vice Mayor Ernesto Mercado said in one of the hearings of a Senate blue ribbon subcommittee on the allegedly overpriced Makati City Hall parking building that Erlinda S. Chong was managing the city hospital’s cafeteria. However, a scan of every floor revealed that on the sixth level, there was a food and management unit, with a dietitian, that provides for the daily meals of the patients.

A receptionist at the lobby said that OsMak was not accepting other food suppliers or concessionaires since it hired a dietitian. But when pressed on who was managing the dietary unit, she said it was the “hospital management.” This was somewhat echoed by the dietary unit’s officer in charge who responded with a prompt but vague answer: the local government of Makati.

A posting of the bid abstracts on the Makati website showed that Cups & Mugs Kitchenette was a bidder for the “dietary supplies for (OsMak) for [the] year 2014” and “the acquisition of contract for a concessionaire at employees’ canteen located at 8th floor, new Makati City Hall building for [the] year 2014.” The approved budget for the dietary supply was P12.9 million.

A certification of Cups & Mugs’ registration with the Department of Trade and Industry (DTI) in Makati confirmed its owner as Kim Tun Sy Chong.

Until February this year, Cups & Mugs was the supplier of the cakes that the Makati local government gives to senior residents on their birthdays. The project began in 2003. In the agreement between the city and the kitchenette dated Jan. 29, 2010, the official address of Cups & Mugs is 2650 Agutaya St., Barangay Pinagkaisahan, Makati City. The same address belongs to a carinderia across from the five-story Kimston Building owned by the Chongs.

When the Inquirer visited the building last Friday, its upper floors were shuttered. Only a 7-Eleven store was using the ground floor. Residents in the area have never heard of Cups & Mugs.