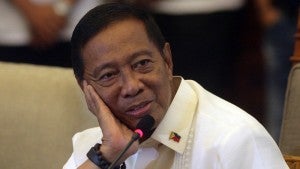 The official supplier until February this year of birthday cakes for Makati City’s senior citizens shares the same address with a carinderia (eatery).

Cups & Mugs Kitchenette and Catering Services also shares the address on Agutaya Street in Barangay Pinagkaisahan, Makati, with a trading firm—Malison Inc.—whose incorporators are said to be fronts of Vice President Jejomar Binay.

The Vice President has denounced the allegations of corruption against him as efforts of his detractors to destroy him before the 2016 elections where he’s leading all contenders, according to surveys.

The incorporators of Malison Inc. are Erlinda S. Chong, Kim Tun S. Chong, Irene S. Chong, Kimsfer S. Chong and Science N. Advento—who all gave the same residential address on Sergeant Yabut Street, Guadalupe, Makati in their filing for the amendment of the firm’s articles of incorporation in the Securities and Exchange Commission (SEC) in 2004.

Kim Tun S. Chong happens to be the sole proprietor of Cups & Mugs Kitchenette, which, according to former Makati Vice Mayor Ernesto Mercado, also has contracts to manage the cafeteria at Makati City Hall and at Ospital ng Makati through Erlinda Chong.

The official address of Cups & Mugs is 2650 Agutaya St., Barangay Pinagkaisahan, Makati City, based on the memorandum of agreement (MOA) between the city and the kitchenette dated Jan. 29, 2010.

Strange as it may sound, the same address belongs to a carinderia across from a five-story Kimston building owned by the Chong family.

The owners of Cups & Mugs and Malison Inc. also own Meriras Realty and Development Corp., a company that Mercado claims is a front of the Vice President for his 8,877-square meter property on J.P. Rizal Extension and Sampaguita Street in Makati.

The property used to be part of the Army’s headquarters in Fort Bonifacio.

A check with the general information sheet (GIS) of Meriras in the SEC showed that Kimsfer S. Chong is the president; Kim Tun S. Chong is the secretary; Irene S.Chong is the treasurer; and Limlingan, Lichnok, Imee S. Chong and Irish S. Chong are directors.

Meriras holds office on the property on J.P. Rizal and Sampaguita Streets, according to Mercado. But in the GIS, Meriras’ principal and business address is 1333-E Angono St., Makati City.

A commercial building and a compound of informal settlers where the carinderia is located share the address listed as that of Cups & Mugs.

The compound consists of some 20 homes. A five-story building on Edsa stands across from the compound.

A resident of the compound, who asked not to be named, said the compound first acquired the 2650 Agutaya St. address after she and several others started living at the site in 1988.

The resident noted that the commercial building was constructed only in 2001 on a vacant lot.

Malou Periña, a staff member of the barangay office, confirmed the resident’s claim that the building and the compound were sharing the same address, but said she did not know how it came about.

She also affirmed that the compound was built earlier than the building.

It is possible for two establishments to share one address, but this rarely happens, according to Makati Post Office Chief Administrator Edmund Suarez.

“If there is such a situation, what we do is to assign the address’ number with a corresponding letter. Let’s say if three houses are designated at 250 Malamig St., one of the houses will be 250A, then another will be 250B, and so on,” Suarez said.

He said that if two structures shared the same address in a particular jurisdiction, then the task of resolving it would fall on the barangay or city hall. “But if it is already admissible [to the parties], it won’t be a problem anymore.”

In the MOA, Cup & Mugs was to supply chiffon cakes for the city’s senior citizens on their birthdays.

The agreement said that “after careful review of the bids submitted in a public bidding conducted last January 19, 2010, the Bids and Awards Committee (BAC) of the City Government of Makati awarded the contract to Cups and Mugs Kitchenette and Catering Services, whose offer is to be most responsive and advantageous to the interest of the client.”

The MOA was signed by then Makati Mayor Jejomar Binay and Kim Tun Chong.

Bidding exercises for projects and supplies of Makati City were only for show, as the winners had been predetermined by the mayor, said Mario Hechanova, former Makati General Services Department head, and his predecessor, Ernesto Aspillaga—both former members of the BAC—when they testified at the Senate hearing on Sept. 25.

Mercado and Hechanova claimed that it was Senator Nancy Binay who had provided the cakes.

Hechanova said at the Senate blue ribbon subcommittee hearing on Sept. 4 that the Vice President, when he was mayor, had once called him to his office to follow up the payment for “Nancy’s cakes.”

Senator Binay described as half-baked allegations by the two former Makati officials that she supplied the cakes that Makati City was giving to senior citizens when she worked at City Hall.

“I deny again in the strongest terms possible and condemn the malicious claim of Engineer Hechanova,” the senator said in a statement. “I did not, again, I did not benefit from the cakes given to senior citizens of Makati.”

In an interview with reporters on that day, Senator Binay said she might as well open a bakeshop.

The senator said that a friend of hers from Bacolod City owned a bakeshop known for its chocolate cake and ensaymada, and that she had convinced her friend to open up a branch in Metro Manila.

She said the bakeshop would be her “next baby.”

Bakerite Cups & Mugs was the supplier until February 2014 of the cakes that the Makati local government gives out to its senior citizens on their birthdays. The project started in 2003.

But it was replaced in March by Bakerite, a bakery at 923 F.R. Hidalgo Street in Quiapo, Manila, operated by Timstate Food and Beverages Corp.

Timstate Food and Beverages’ office address, however, is in Makati at 5438 Timstate Building on South Super Highway in Barangay Bangkal. The corporation is owned by the Leong family of Homonhon Street, Magallanes Subdivision in Makati City.

The business address of the kitchenette in the DTI certification was “Makati City, NCR, Fourth District, National Capital Region (NCR).”

A resident of 2650 Agutaya St., who asked not to be named, said there had been no Cups and Mugs or any bakery that operated at the compound. “I have never heard of the name Cups and Mugs,” the resident said.

Another resident of the compound said no city hall employee had ever inquired about any cake business supposedly found at the site.

The bakery nearest Agutaya Street is the Balabak Bakery on the next street, Tolentino. No cakes or pastries are being sold at Balabak.

Across from the carinderia is the Kimston Building using the same address. But unlike the eatery it has no plate displaying its number.

A 7-Eleven convenience store was on the ground floor, while the two upper floors were apparently unoccupied. No building official or guard was onsite.

“The [7-eleven] store has been here since 2011. We never heard of that [Cups and Mugs],” said a member of the 7-Eleven crew, who asked to have his identity withheld.

Barangay employee Periña said the building at 2650 Agutaya St. was previously occupied by Kimston Grocery, a shabu-shabu restaurant and a billiards gaming station, but no Cups & Mugs had been registered in the area based on barangay records.

Periña said that Kim Tun Chong was not on the barangay’s list of business owners in the area. But she said some businesses tended to register directly with City Hall instead of going to the barangay hall.

Except for the ground floor, the upper floors of the building at 2650 Agutaya St. on the corner of Edsa, are shuttered.

Was it because of the tax evasion cased filed by the Bureau of Internal Revenue (BIR) against Erlinda S. Chong and Irene S. Chong?

Erlinda is the president and Irene is the chief finance officer, respectively, of Malison Inc. (a company engaged in the trading and manufacture of food and non-food items), according to the BIR.

In a press release issued on Feb. 24, 2011, the BIR said the Chongs “with registered business address at 2650 Kimsto[n] Bldg, Agutaya St., Guadalupe Nuevo, Makati City” were charged in the Department of Justice with willful failure to pay tax in violation of Section 255 of the National Internal Revenue Code of 1997.

The BIR said its investigation found that Malison had value-added tax and income tax liabilities amounting to P2.519 million.

With only a convenience store operating in the Kimston Building, Cups & Mugs and Malison Inc. appear to be no longer holding offices there—their declared address shared with the carinderia.

Nancy Binay: ‘I have no bakeshop and don’t know how to bake’