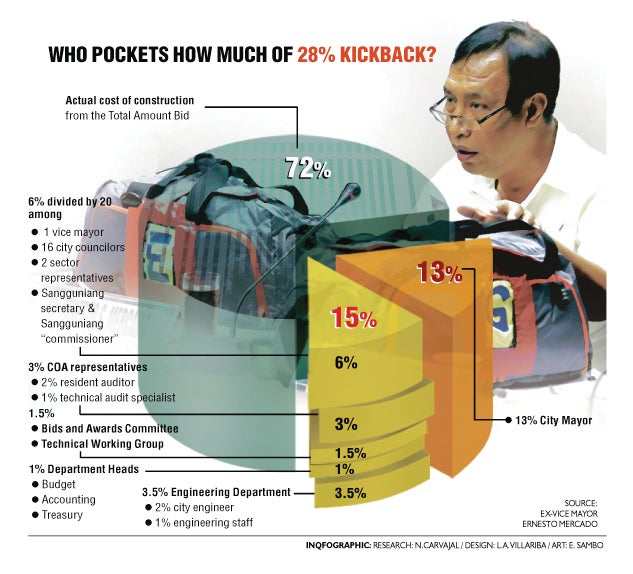 At least P4 billion from 10 infrastructure projects that the Makati City government awarded to a favored contractor between 1999 and 2014 went to city officials and resident auditors as kickbacks, according to former Makati Vice Mayor Ernesto Mercado.

The 10 projects awarded to Hilmarc’s Construction Corp. cost the taxpayers of Makati at least P15 billion, said Mercado, a witness in a Senate blue ribbon subcommittee investigation of alleged irregularities in the Makati government during the term of Vice President Jejomar Binay as city mayor.

“Twenty-eight percent from every project was shared by the mayor down to the lowest official in the web involved in the conspiracy,” Mercado told the Inquirer in an interview in his office in Makati.

Mercado said 13 percent of the 28-percent kickback went to Binay while he was mayor of Makati.

Mercado admitted accepting a share of the kickbacks when he was a city councilor and then vice mayor.

“The rate has actually gone up. It’s actually higher now,” the contractor said.

Junjun Binay served as a sectoral representative and later as councilor before he took over the reins from his father in 2010.

Makati’s big-budget infrastructure projects in the past decade handled by Hilmarc’s were the following:

Phases 1 and 4 of the University of Makati Nursing School building (P804 million).

Phase 1 of the swimming pool in the Makati Garden Park (P31 million).

Phases 1, 2, 3 and 4 of Makati University Administrative and Auditorium (P332 million).

Documents obtained by the Inquirer showed these projects were implemented during the administrations of the Vice President when he was the mayor (1986-1998; 2001-2010) and his wife, Elenita Binay, who succeeded him (1998-2001) and his son (2010 to present), who, Mercado said, continued the business with Hilmarc’s.

Mercado said 6 percent of the kickback from every project was divided into 20 slices, which went to the vice mayor, the 16 members of the city council, the two sectoral representatives and the city council secretary.

Half of the share of the city council secretary went to a “commissioner” to the council, he said.

Mercado said the “commissioner” kept track of all infrastructure projects of the city and received the shares and allocations for all the members of the city council.

“The commissioner is someone who lost an election and had no current government position, but is given an office in the City Hall. His job was to keep track of all the cash flow of all infrastructure projects and the share of the kickbacks of the city council,” Mercado said.

The resident COA auditor and the technical audit specialists got 3 percent, he said.

“The resident auditor gets 1 percent because she signed the clearance document, while the remaining 2 percent is shared by the COA technical audit specialists,” he said.

But COA resident auditor Celia Cagaanan turned down the money offered to her as her share for signing the clearance for the P2.3-billion Makati City Hall Building II, Mercado said.

The city’s BAC and TWG received 1.5 percent, he said.

Mercado said the payoff for the BAC and TWG members was paid in advance to ensure that the favored contractor got the project.

He said 1 percent went to the heads of departments, where the infrastructure papers went through.

The BAC chair from 2007 to 2013 was Marjorie de Veyra and the members were Nelson Morales, Mario Hechanova, Lorenza Amores, Pio Kenneth Dasal, Giovanni Condes, Gerardo K. San Gabriel and Ulysses Orienza. Manolito Uyaco was the head of the BAC secretariat.

De Veyra, who served as city administrator during the past decade, ran for vice mayor in 2013 but lost to Romeo Peña, who is not an ally of the Binays.

Espina is now assigned to the Pasay City Hall, according to the COA personnel division.

Nelson Morales, who resigned in 2012, was shot dead in Albay province last year.

The documents obtained by the Inquirer also showed that the bidding process was violated.

The documents indicated that the Binays approved and signed all the documents despite obvious violations such as lack of important details like the date of preparation, source of funds and description of projects.

Invitation to bid was published in the Filipino tabloid Balita for just one day, instead of in a newspaper of general circulation for 14 days, as required by the procurement law.

The Inquirer obtained a copy of a certificate of publication issued by Balita vice president for classified advertising Lyne Alano-Abanilla to the city government of Makati.

Public announcements of biddings were posted only in the city public library instead of conspicuous places such as elevators and bulletin boards at the entrance of buildings.

A certificate of posting issued by Manolito Uyaco, head of the BAC secretariat, showed that an invitation to apply for eligibility and bid was posted “in conspicuous places, such as the second floor of the old Makati City Hall public library and the new city hall building.”

The suppression of the invitation was intended to limit the bidding to Hilmarc’s, Mercado said.

“Having no other bids to be read and clarification to be made, the bid opening adjourned at 2:35 in the afternoon,” the BAC said in the minutes of a meeting called on

A Hilmarc’s employee, identified in one of the documents obtained by the Inquirer as Grace Araza, represented the company in bid conferences.

She was the representative of the company authorized to receive payments for the projects from City Hall, the document showed.

A City Hall source who requested anonymity said he delivered a total of P56 million to the house of the Vice President. The source said he knew how much he carried because the amount was written on a piece of paper attached to the bag.

Mercado said Nelson Morales was assigned by the Vice President from 2007 to 2012 as the repository of the kickbacks from contractors, including Hilmarc’s.

“Morales was also the one in charge of the allocation and the distribution of shares,” Mercado said.

He said that aside from him, another official who was a department head was present whenever Morales was counting money for the Binays.

“A trusted friend and assistant of Morales helps prepare the money for distribution and delivery, including the money for the Vice President,” Mercado said.

Mercado said he was a frequent visitor to Morales’ office, which occupied half of the sixth floor of the main City Hall building, and he saw the bagman receive money, placed either in bags or in brown envelopes.

“I have personally witnessed Morales receiving the cash from contractor’s representatives and count the money,” he said.

“If the amount to be apportioned is big—more than P50 million—the money was placed on the long table in his conference room. If it’s only a few millions and would fit the round table, they did it (counting and allocation) there,” Mercado said.

Mercado said Morales replaced another former ally and trusted friend of Binay, Nelson Irasga, who resigned after he and the Vice President had a falling out when Irasga ran for mayor but lost to Binay’s wife, Elenita Binay, in 1998.

“Like me, Irasga was also promised by Binay to succeed him, but did not honor his word and let his wife ran as mayor against Irasga,” Mercado said.

He said Morales was designated by Binay to receive all the kickbacks because he had direct contact with the contractors in his capacity as Irasga’s deputy.

Deliveries to the house of the Vice President on Caong Street in Barangay San Antonio in Makati City was “usually on Friday,” Mercado said.

He said the duffle bags containing the money were received by one of the children of the Vice President.

Somebody must have been snitching money from the bags because later, the bags were provided with locks, Mercado said.

“That was when the Vice President said that the bags be entrusted to the current mayor, Junjun,” Mercado said.

He said only the Binays knew the combinations for opening the locks.

In his testimony in the Senate, Mercado said the snitch was one of Binay’s daughters.

Documents obtained by the Inquirer showed that the city government dealt with other construction companies but the juiciest projects were always awarded to Hilmarc’s.

The projects were worth more than P10 billion.