Davao Customs chief defies order to quit, is fired instead 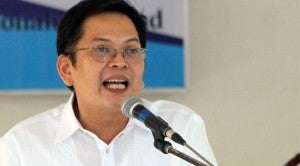 MANILA, Philippines–Eight months after being appointed head of the Bureau of Customs’ Davao collection district, Army Brig. Gen. Ernesto Aradanas (ret.) has been relieved for alleged involvement in oil smuggling, among other irregularities.

Customs Commissioner John Phillip Sevilla on Sept. 30 “asked him to tender his resignation, but he refused,” said Charo Logarta-Lagamon, chief of the BOC Public Information and Assistance Division (PIAD).

“However, since we are all coterminous project managers in the Office of Revenue Agency Modernization and merely detailed at the Bureau of Customs, none of us have security of tenure like regular civil service employees. Hence, the termination order from the Department of Finance,” she told the Inquirer on Thursday.

The BOC is a DOF-attached agency.

Customs Deputy Commissioner for Intelligence Group Jessie Dellosa said there were “so many reasons” for Aradanas’ termination.

“I have not seen the termination order from the DOF. What I know is that he was asked to resign by Commissioner Sevilla,” Dellosa, a former Armed Forces of the Philippines chief of staff, said.

Both Dellosa and Aradanas, former chief of the 603rd Infantry Brigade and executive vice president of the National Defense College of the Philippines, belong to Philippine Military Academy “Matapat” Class of 1979.

The Inquirer tried but failed to reach Aradanas for comment.

However, in an Oct. 2 letter to Finance Secretary Cesar Purisima, a copy of which was obtained by the Inquirer, Aradanas disputed the allegations against him.

“Contrary to (the) perception of the honorable commissioner and the people around him, the undersigned firmly believes he has acted within the bounds of the Tariff and Customs Code of the Philippines,” he wrote.

Earlier, Sevilla had directed Aradanas to issue a Warrant of Seizure and Detention (WSD) against a shipment of suspected smuggled petroleum products.

Aradanas instead cleared the shipment and had it moved to a private port in Tambler, General Santos City, where it was apprehended by a joint team from the Customs Intelligence and Investigation Service and Philippine Coast Guard.

“Unfortunately, this was seen by Commissioner Sevilla as an act of defiance and inability to carry out a direct order coming from the head of the agency,” Ardanas explained in his letter to Purisima.

He said that “such authority should not and cannot be exercised arbitrarily and capriciously. It is an absolute requirement that the person issuing the WSD must be certain that probable cause exists and such presence must be determined personally by the issuing authority or is personally convinced, based on available evidence, that the shipment is in violation of customs laws.”

Aradanas recalled that during a meeting with Sevilla, “he emphatically expressed his displeasure at how the situation was handled, which for him was a clear example of oil smuggling. Accordingly, I was directed to immediately tender my resignation.”

He said he would “humbly submit to any order coming from (Sevilla) or the Department of Finance for as long as the same is in accordance with existing customs and department laws.”

Another customs official accused him of involvement in other anomalies at the Davao port, including the release of two shipments of suspected smuggled oranges from South Africa in July and August despite alert orders issued by the BOC Intelligence Group.

“The Port of Davao lifted the alert orders despite the fact the BOC has an intensified campaign against the entry of fruits and other food items that may pose risks to public health and the local agriculture industry,” said the official, who asked not to be named for lack of authority to speak to media.

Also, “the shipments were made to appear that they originated from the United States. Clearly, fake import papers were used, yet they were still released to their consignees,” he added.

In an Aug. 20 statement, the PIAD said the government warned against the “movement of all cargoes from Africa as part of precautionary measures against the reported outbreak of the Ebola virus.”