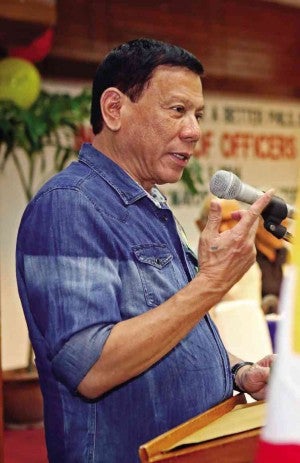 DAVAO CITY, Philippines—The argument for federalism has not changed—a centralized form of government leads to neglect of areas far from the seat of power.

This was stressed through a question by Leoncio Evasco, mayor of Maribojoc town, Bohol province, who supports the move to federalism now being espoused by his friend, Davao City Mayor Rodrigo Duterte.

“Have you ever been to Don Marcelino town, Davao del Sur, at the height of the Disbursement Acceleration Program (DAP) and Priority Development Assistance Fund (PDAF) scandal?”

Evasco raised the question to stress the need to shift to a federal form of government. He answered it himself.

“If only you’ve been to the national highway of Don Marcelino town on the way to Jose Abad Santos town at the height of the discussions of the DAP, then you’d understand why Mindanao leaders are pushing for the federal form of government,” said Evasco, also a former aide of Duterte.

“The roads are so difficult and yet in Manila, you keep hearing about the DAP and the PDAF,” said Evasco.

“They are stealing all the money and then you ask: What are they doing with all the money when we still have a national road like this?” Evasco said.

Duterte, who was a guest at an event sponsored by Federal Movement for a Better Philippines in Cebu City, has been pushing for federalism as one of the solutions to the problems besetting Mindanao.

Evasco was quick to say Duterte’s push for federalism doesn’t have anything to do with a campaign to push the Davao City mayor to run for president in 2016.

“Those are two different things,” Evasco said, adding that Duterte had consistently rejected calls for him to run for president.

Although the federalism issue crops up only when the election season draws near as a side issue of politics, Evasco said the federal form of government would be more effective in dealing with problems peculiar to Mindanao compared with a centralized form of government.

In the Cebu forum, Duterte raised the possibility of creating a federal state, called the BangsaTausug, to appease the group of Moro National Liberation Front chair Nur Misuari.

Misuari, according to Duterte, does not see eye to eye with the other Mindanao ethnic groups that would govern the Bangsamoro entity if it was passed by Congress under a peace agreement between the Moro Islamic Liberation Front and the Aquino administration.

Evasco said that with Duterte pushing for the federal form of government, he hoped that the proposal would catch fire.

“We all know that Mindanao produces as much as 60 percent of the gross domestic product but only about 40 percent returns to it in terms of services,” Evasco said. Germelina Lacorte, Inquirer Mindanao