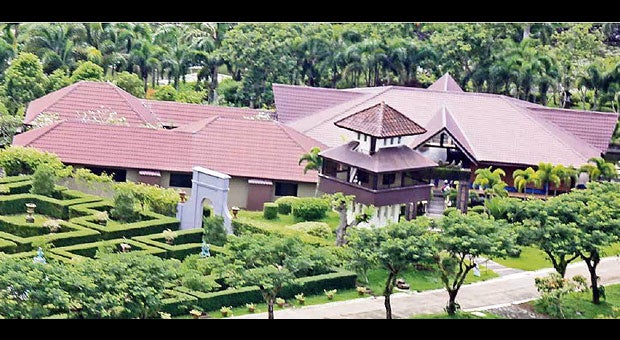 HOME ON THE RANGE A mansion stands before a sculptured English garden that Dr. Elenita Binay ordered built based on the design of the Kew Garden in London, according to former Makati City Vice Mayor Ernesto Mercado. Vice President Jejomar Binay vehemently denies his family owns the mega-size resort property in Rosario, Batangas province. CONTRIBUTED PHOTO

MANILA, Philippines–Saying his detractors were “hallucinating,” Vice President Jejomar Binay on Thursday denied he owned a 350-hectare property in Batangas province, claiming that he leased only

Tiu confirmed on Wednesday that he owned the property, but senators looking into the ownership of the estate said Thursday that they believed he was only a dummy for the Vice President.

Speaking to reporters in Kidapawan City in North Cotabato province, Binay said he pitied Tiu for being dragged into the smear campaign against him.

“[Tiu] hasn’t even testified yet [but he] is now being destroyed. That’s the [way] of those senators,” Binay said. [Tiu] is the real owner [of the property]. What’s the problem with that? I think [the senators have] a bum steer [in their hands].”

And that, he said, is why he’ll never appear in the Senate blue ribbon subcommittee’s inquiry into the alleged overpricing of the Makati City Hall Building II, which has been expanded to look into other alleged irregularities in Makati during his term as mayor.

During the hearing on Wednesday, former Makati Vice Mayor Ernesto Mercado presented an aerial video footage and still photos of the property and its luxurious features and said the Binays owned the entire spread.

Mercado said he frequented the property when it was just 5 hectares, running errands for the Binays like delivering feed for the pig farm there and the wages of the workers.

“That’s an old issue. He’s only dreaming,” he added, referring to Mercado.

Binay said a case involving the Batangas property had been filed against him in the Office of the Ombudsman.

He said that after alleging he owned 100 hectares and then 200 hectares of the property, Mercado, “who apparently lost a cockfight bet,” was now saying he owned 350 hectares.

“We do not own [the property]. We just leased a portion of it for our piggery business,” he said, referring to JCB Farms, which he launched in 1994 and claimed he sold in 2010 when he was elected Vice President.

Binay said he had already explained the matter before. Mercado, he said, was just “hallucinating.”

Binay’s lawyers said on Wednesday the Vice President was not the owner of the property but just leased 9 hectares of it for his piggery and the flower farm of his wife, former Makati Mayor Elenita Binay.

They said the Vice President sold his interest in the piggery in 2010 to Agrifortuna Inc., which is owned by businessman Laureano Gregorio. Binay, they said, netted P10 million from the sale.

Binay said the Batangas property was not part of the Senate blue ribbon subcommittee inquiry.

“The investigation is supposed to be on the allegedly overpriced building. Now you can see that this is just politics and that this has become personal. This is not a criminal case,” he said.

Asked whether he would go to the investigation, Binay replied: “Will you go there if you know where all this [is leading] to? I won’t give dignity to them … I won’t dignify their actions.”

Binay’s political spokesman, Cavite Gov. Jonvic Remulla, said the Batangas property’s real owner, Tiu, was a “legitimately wealthy person” and businessman and that if his accusers were proven wrong, they should apologize to him.

“[Tiu] has no place in the political circus [to which the Vice President is now being subjected],” Remulla said in an interview on television with Karen Davila.

In a text message from Spain on Wednesday, Tiu said he would appear in the Senate inquiry to clarify things about the Batangas property.

Later, in an e-mail, he said he was aware that he and his companies have been labeled dummies for Binay.

“I am deeply hurt and offended by these malicious accusations. I am my own man. I worked hard for what I own. My track record will speak for itself,” Tiu said. “Let me categorically put on record that I am a legitimate businessman since 1997.”

Tiu is chair of AgriNature Inc. (ANI), an agro-commercial enterprise, and Greenergy Holdings Inc., a holding firm for renewable energy businesses that has a majority stake in Sunchamp Real Estate Development Corp., the operator of the agri-tourism park on the Batangas property that the Senate investigators suspect is actually owned by Binay.

“Our leasehold rights over the farm is aboveboard and legitimate,” Tiu said.

“To further set the record straight, I never had any transactions or contracts with the Makati city government. To reiterate, I am the legitimate owner of my businesses. I will face these unscrupulous politicians to clear my name and protect my businesses,” he said.

Subido and Binay’s spokesman Joey Salgado said on Wednesday that Binay sold his interest in the piggery to Agrifortuna Inc. in 2010 when he was elected Vice President. Subido said only Elenita Binay’s flower farm remained and this was leased.

Contrary to Mercado’s claims, Subido said the farm was only 145 ha, not 350 ha, and 9 ha of this was leased by Binay starting 1994. Binay’s JCB Farms occupied 3 hectares.

Binay sold JCB Farms for P10 million to Agrifortuna, owned by Laureano Gregorio. The Binay couple were incorporators of Agrifortuna for a paid-up capital of P50,000, but sold their shares to Gregorio in 1995.

Sunchamp acquired Gregorio’s rights to the property, and this had been disclosed to the Philippine Stock Exchange, Subido said.