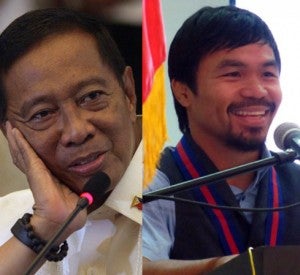 Pacquiao, who accompanied Binay, appeared to have been stung by what he said was a demolition job against the Vice President that also targeted him.

“This is what I hate about politics in this country,” said the boxer, who is also a member of the House of Representatives and now coach of a professional basketball team.

“Why destroy the reputation of other people just to boost your own political stock? Can we not focus on our program of government instead of resorting to demolition and mudslinging?” said Pacquiao.

Pacquiao was reacting to the distribution, shortly before Binay’s arrival here, of leaflets labeling his coming fight with American boxer Chris Algieri as a drive to raise funds to enable Pacquiao to pay his taxes. The same leaflets carried allegations of corruption against Binay, too.

The leaflets were labeled “Dyaryo Bistado” and appeared to be Manila-based but with no editorial box.

“We all know who are behind this demolition job against Vice President Binay and me,” said Pacquiao.

“Why hit me below the belt? I am not even the number one among the possible senatorial aspirants in the recent Pulse Asia survey,” Pacquiao added.

Binay was here on Monday in a trip that had all the trimmings of a campaign sortie.

He went to the city public market, where he was joined by Pacquiao and Mayor Ronnel Rivera in a boodle fight.

From the market, Binay and his entourage proceeded to the Lagao National High School, where he was an invited speaker.

Pacquiao, who took a break from training to be with Binay, helped the Vice President distribute T-shirts with Binay’s face and the words: “Kay Binay gaganda ang buhay.”

Binay briefly left the city to visit towns in South Cotabato for meetings with local leaders.

He returned and had dinner with Pacquiao, the boxer’s wife now Vice Gov. Jinkee, Rivera and Sarangani Gov. Steve Chiongbian-Solon.

Amid the corruption scandal hounding Binay, Mayor Rivera said he continued to support the Vice President not only because Rivera belonged to Pacquiao’s local party, People’s Champ Movement (PCM), but also because Binay is not being charged in court but simply being accused of corruption by politicians known to be his enemies.

PCM and UNA have an alliance.

“I am a member of PCM, which is an affiliate of UNA,” said the mayor. The Vice President, he said, “is not convicted. An accused is presumed innocent until proven guilty by a court.”

“Besides, I am the mayor and it is my official duty to welcome the Vice President,” he added. Aquiles Z. Zonio, Inquirer Mindanao