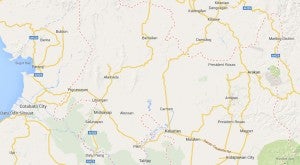 PIKIT, North Cotabato–Two people were killed while three other churchgoers were hurt in a blast that took place inside a church here Wednesday night.

Pangandigan said the victims were all attending a mid-week prayer meeting inside the United Church of Christ in the Philippines (UCCP) along Vidal Cabanog Street, Barangay Poblacion, headed by Pastor Jerry Sanchez, when a rifle-fired grenade landed and exploded inside the church.

The attack happened at about 7:35 p.m. a few meters away from the Pikit Central Elementary School.

Ferolin was rushed to a Midsayap hospital but was declared dead on arrival.

Pangandigan said the prayer meeting was about to end as one of the participants was giving a thanksgiving message when the explosion occurred.

“We are still unsure of the motive, we are still investigating,” he said, adding that none among the congregation members had seen the attackers.

Pastor Sanchez said he and the churchgoers had no idea why they were attacked.

The grenade landed inside the church and exploded close to Ferolin, Cabilona and Manolid who were all sitting at the rear side of the church.

“We have no idea why this thing happened. We condemn this act,” Sanchez said, adding that UCCP has been active in promoting peace in the community.

“We pray that no similar incident will happen in the future in Pikit,” he said.

The explosion damaged the church pews, and glass panes were shattered.

M-79 grenade shells were found 20 meters from the scene of the bombing.–With a report from Williamor Magbanua, Inquirer Mindanao and Aries Hegina, Inquirer.net