Pope, prelates get crash course in the joys of sex 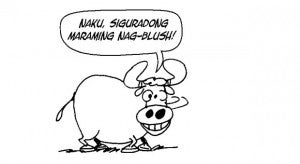 VATICAN CITY—Pope Francis, cardinals and bishops from around the world have gotten an unexpected lecture on the joys of sex, from a Catholic couple brought in to talk about what makes a marriage last.

Ron and Mavis Pirola, parents of four from Sydney, Australia, told a Vatican gathering of some 200 prelates that sexual attraction brought them together 57 years ago and that sex had helped keep them married for 55 years.

“The little things we did for each other, the telephone calls and love notes, the way we planned our day around each other and the things we shared were outward expressions of our longing to be intimate with each other,” the couple said in a joint statement to the closed meeting late Monday.

“Gradually we came to see that the only feature that distinguishes our sacramental relationship from that of any other good Christ-centered relationship is sexual intimacy, and that marriage is a sexual sacrament with its fullest expression in sexual intercourse.”

The audience of celibate men was a bit taken aback.

“That’s not what we bishops talk about mostly, quite honestly,” a sheepish British Cardinal Vincent Nichols told reporters on Tuesday. “But to hear that as the opening contribution did, I think, open an area… and it was a recognition that that is central to the well-being of marriage often.”

Francis called the two-week meeting of bishops to try to figure out how to make Church teaching on a host of Catholic family issues—marriage, divorce, homosexuality and yes, sex—more relevant to today’s Catholics.

The debate will continue in October 2015, and culminate when Francis issues a final document with recommendations offered by the synod.

Several of the bishops complained that the Vatican’s own teachings on sexual matters are often impenetrable to ordinary people. The Vatican’s main document on sex, the 1968 encyclical Humanae Vitae, lays out the Church’s opposition to artificial contraception with complicated moral theological arguments and 41 footnotes.

The Pirolas told the gathering that they occasionally read Church documents on family matters, “but they seemed to be from another planet, with difficult language and not terribly relevant to our own experiences.”

The Rev. Tom Rosica, a Vatican spokesperson, said several bishops argued that the Church had to find a “new language” to both explain its teaching and invite people in.

“Language such as ‘living in sin,’ ‘intrinsically disordered’ or ‘contraceptive mentality’ are not necessarily words that invite people to draw closer to Christ and the Church,” he said, citing one intervention.

Many observers have credited Francis with drawing people closer to the Church precisely because of the simplicity of his language, compared to the dense theological treatises often laid out by his predecessor, Pope Emeritus Benedict XVI, who as a cardinal was responsible for penning many of the Vatican’s major documents on hot-button issues, including homosexuality.

The Vatican handpicked the Pirolas and other model Catholic couples to participate in the synod to give bishops a sense of what real-life Catholic families go through and proposals for how the Church can help support them. Their intervention showed just how different a synod this is with Francis and his message of welcome running the show.

The Pirolas told the story of how devout Catholic friends reacted when their gay son wanted to bring his partner home to a Christmas gathering.

“They fully believed in the Church’s teachings and they knew their grandchildren would see them welcome the son and his partner into the family,” the couple said. “Their response could be summed up in three words: ‘He’s our son.”’

Nichols said the synod gave them a round of applause.

In an indication, though, that opposition to such a welcoming position remains high, a group of conservative Catholic groups blasted the Pirolas’ example as “damaging” to the Church.

“The unqualified welcome of homosexual couples into family and parish environments, in fact, damages everybody, by serving to normalize the disorder of homosexuality,” Maria Madise, coordinator of Voice of the Family, said in a statement.

John Smeaton, of the London-based Society for the Protection of Unborn Children, said the welcome that the Pirolas’ statement received from the synod was disturbing.

“The homosexual agenda is forcing its way into schools, universities, workplaces and sports clubs,” he said in a statement. “The last thing families and parishes need is for Church leaders to tell them to welcome homosexual couples.”