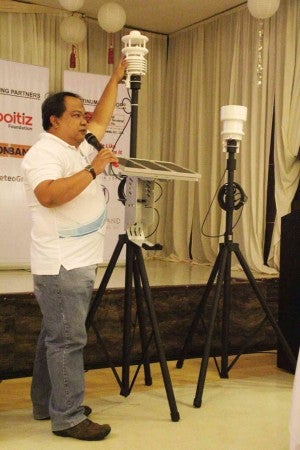 ALVIN Tobias, operations and maintenance supervisor of Weather Philippines Foundation Inc., presents and explains the use of the pair of gadgets provided to local government units to monitor climate situations in the localities for use in disaster mitigating actions of the communities. JUAN ESCANDOR JR.

CAMARINES SUR, Philippines—Aiming to complement government initiatives to mitigate disasters, a foundation is rolling out automated weather stations (AWS) gadgets in 20 of the 35 municipalities of Camarines Sur province.

Weather Philippines Foundation (WPF) will network the AWS gadgets through the Internet and collate the weather data at a base in Manila manned and monitored by a full-time technical staff.

“Its mission is to provide free and accurate weather forecast as a public service to the Filipino nation,” said Kaye Rosario, sustainability officer of the foundation. Established on Feb. 10, 2012, WPF is a collaboration between the Aboitiz Group and UnionBank, and MeteoGroup (formerly Meteomedia), a leading European weather services organization.

Caramoan and Pamplona received theirs in September.

Some 1,000 units will be set up in local government units (LGUs) around the country, which are classified “priority meteorological sites,” or areas highly prone to natural disasters, to enable them to timely respond to “the variable weather conditions to avoid loss of life and property.”

Rosario said the LGUs would enter into agreements with WPF to maintain and secure the AWS gadgets and a dedicated technical team that could interpret information.

The gadget saves data every 10 minutes and sends them to the central database, said Alvin Tobias, operation and maintenance supervisor of WPF. It is programmed to automatically store and resend the data should sending fails in any instance.

The AWS project is also designed to hitch on mobile information technology with the development of a mobile application and microsite that contain WPF’s training, animation and videos on disaster preparedness, as the implementation advances.

For it to take off, WPF will train more than 570 disaster risk reduction personnel, environmental officers and city engineers from all over the Philippines on AWS installation and the use of WPS—weather portal www.weather.com.ph.

Next year, the foundation will conduct “basic meteorological trainings,” which include knowledge on weather and its conditions, and tropical cyclone, and complement training on disaster response, and search-and-rescue operations.

Rosario said WPF was partnering with the Center for Outdoor Recreation and Expedition Team of the Primer Group to train communities on how to respond to disaster and learn the protocols and practices that will mitigate disaster impact and avoid loss of lives.

Hopefully, the communities will be able to create their own disaster preparedness programs to reduce the impact of weather-related disasters, she said.

Mayor Ricardo Aquino of Ragay, which received the AWS gadget on Friday, said the WPF project “will further empower the localities in disaster-prone areas” as it would be building on the present initiatives of the government in disaster risk reduction and response management program.

“The LGUs will not be dependent on the big weather agencies, which usually gives the big picture, for the data and situation in the localities because right then and there they will know,” Aquino said. For example, he said, “if flooding is imminent, the rain gauge reading will show in real time.”

The League of Provinces of the Philippines also installed 80 AWS gadgets in provincial capitols nationwide, with the Department of Science and Technology undertaking the research.

Rosario said WPF was still dependent on weather data generated by several national and international weather stations. In the long run, it would project its own model based on the data stored through the years, she said.