COTABATO CITY, Philippines – Senator Teofisto Guingona III has assured the public the Senate will carefully study the proposed Bangsamoro Basic Law that will set up a new more powerful autonomous government for Muslim-dominated provinces in Mindanao.

Guingona said on Wednesday that he has organized a study group that would serve as a “listening post” during public consultations on the Bangsamoro Basic Law (BBL), which started here Wednesday.

Among the issues nagging the proposed BBL is land ownership.

“Personally, I support the passage of the BBL, but we want to know the sentiments of the people, especially the affected inhabitants,” Guingona, chairman of the Senate committee on peace, unity and reconciliation, told reporters here.

“Let’s listen to all suggestions and objections and find ways to come up with a justifiable solution, a common denominator to attain durable and lasting peace in the South,” the Mindanao-based lawmaker said.

Senator Ferdinand Marcos Jr., chair of the Senate committee on local governments, said the collegial decision must be anchored on “the interest of the greater majority longing for durable and lasting peace in the Southern Philippines.”

“The Senate must have to decide with prudence on what’s best for the Bangsamoro without prejudice to other Filipino citizens,” he said before the public forum held at the Notre Dame University gym here. 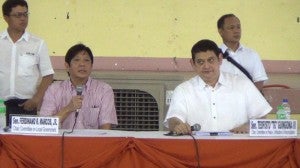 But Marcos has expressed support for the BBL too as this would be “crucial and essential for all inhabitants, regardless of tribe, socio-economic status, political and religious affiliations to cherish for a life time.”

He said if it became apparent during Congress deliberations that the proposed BBL, based on its provisions, would be key to Mindanao’s elusive peace, then lawmakers should ensure its passage through Congress.

Marcos said the Senate would ensure that all provisions of the BBL would follow the Constitution “with probably some modifications from the existing Local Government Code under an envisioned ministerial form of government.”

Marcos also took note of some ARMM employees’ apprehension of being displaced in the new Bangsamoro government bureaucracy.

He said rules and guidelines on tenure of government personnel would fall under the Civil Service Commission’s jurisdiction. “They cannot just be removed or replaced unceremoniously without a CSC directive,” Marcos said.

“It’s good that vital issues and concerns were raised to ensure that the approved basic law for the Bangsamoro is not only constitutional, but doable for all longing for uninterrupted peace and progress in Mindanao,” former Justice Secretary Simeon Datumanong, who was the first appointed leader of the defunct Regional Autonomous Government of Regions 9 and 12 (Western and Central Mindanao).

Datumanong said the public forums should be an opportunity for all to “share and contribute their expertise to attain the peace that they’ve been fighting for. “

Guingona believes that land ownership, family feud (rido) and disarmament are among the tough issues that have to be resolved in the series of the public hearings, which will also be staged in Marawi City in Lanao del Sur, Zamboanga City, Jolo in Sulu, Tawi-Tawi, and Basilan.

Guingona expressed optimism that by March next year, the Senate could already come up with a refined BBL version.