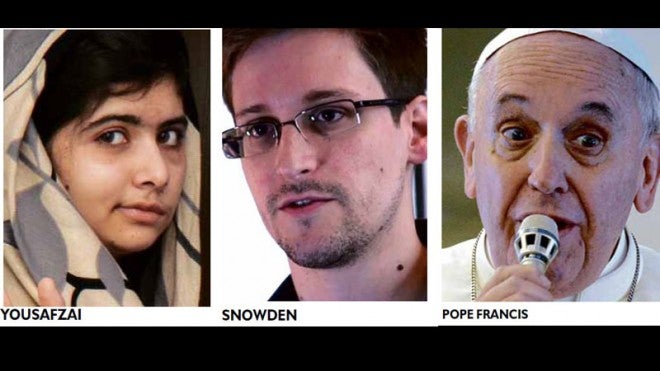 Last year, the physics prize awarded to Peter Higgs and Francois Englert for the Higgs particle was widely predicted, but Nobel pundits and bookmakers tend to focus more on who will get the prestigious peace and literature awards.

This year saw a record 278 peace prize nominations and, while the list is secret, some names have been revealed by their sponsors, including Snowden, who was nominated by two Norwegian members of parliament.

Kristian Berg Harpviken, director of the Peace Research Institute Oslo (PRIO), is one of few experts to publish an annual shortlist of likely winners, even if he has yet to predict one accurately.

This year he ranked Snowden second place behind Pope Francis for exposing the extent of US electronic surveillance. However, he acknowledged that the former intelligence analyst would be a controversial choice as “many continue to see him as a traitor and a criminal.”

Others have rubbished the Snowden speculation.

“It would be really courageous to give it to Snowden,” Robert Haardh, head of Stockholm-based Civil Rights Defenders, told Agence France-Presse.

“But judging from the past, I can’t see that coming. It’s too controversial and Scandinavians are too fond of the (United) States.”

“The massively unjust global distribution of wealth is detrimental to peace … Pope Francis has brought attention to the fate of the poor, and the need for a new approach to development and economic redistribution,” according to the PRIO director’s prediction.

Critics point out that a papal Nobel would cause a similar outcry to US President Barack Obama’s 2009 Nobel less than a year into his presidency, which led to complaints he was awarded for potential good deeds in the future rather than anything he had achieved.

Other favorites, also tipped last year, were 17-year-old Malala Yousafzai, the Pakistani activist for girls’ right to education, who was wounded by the Taliban in 2012, and Congolese doctor Denis Mukwege.

The Nobel could also go to a champion of democracy and human rights in Russia, such as the opposition newspaper Novaya Gazeta, cofounded by Mikhail Gorbachev in 1993 with part of his peace prize money, or to human rights activist Ales Bialiatski from the Russian-backed dictatorship Belarus.

“This year has been marked by a lot of drama. It can mean the list will look different,” Harpviken told Norwegian News Agency (NTB), adding that he believed the committee would search for a laureate linked to major upheavals and conflicts of the last year.

“But that does not necessarily mean that they will find any,” he added, echoing the view of several analysts that the ongoing wars in the Middle East and Ukraine do not easily lend themselves to a peace prize.

Just over a week ahead of the Oct. 10 announcement, Harpviken told NTB he was planning to update his forecast.

Last year, the peace prize went to the Organization for the Prohibition of Chemical Weapons.

The literature prize is no less difficult to predict.

Once again the Japanese author Haruki Murakami is the bookmakers’ favorite with 5/1 odds at Ladbrokes but literary critics are less confident about his chances.

“Murakami is probably a readers’ favorite and certainly popular with many journalists, but he lacks that extra depth,” said Elise Karlsson, literary critic with Swedish daily Svenska Dagbladet.

There have only been four African literature laureates since the prize began in 1901, making the prominent Kenyan author Ngugi wa Thiong’o and Algerian writer Assia Djebar strong favorites among critics.

The same goes for Somali novelist Nuruddin Farah, who suits the “genre of the Swedish Academy,” according to Claes Wahlin, at the Swedish daily Aftonbladet.

The literature prize is expected to be announced on Thursday next week, unless the academy fails to agree on a name, in which case it may be postponed for a week.

The first Nobel to be announced will be the medicine prize on Monday, followed by physics on Tuesday, and chemistry on Wednesday, with the economics prize traditionally dominated by Americans wrapping up the Nobel season on Oct. 13.

The scientific prizes are often shared among several cowinners, which is also occasionally the case for the peace prize.

Read Next
When ‘shabu’ traffickers have a way with words
LATEST STORIES
After winning title, time for LA Tenorio to give back to Batangas folk
‘Mia’: Rom-com with a cause a career-boosting showcase for Coleen Garcia
No.13 lucky for Orlando Bloom
The ties that bind: Why the guys of Black Eyed Peas prefer to stay together
How Yam handles flirtatious guys
MOST READ
Nadine Lustre’s phone stolen in Brazil
Will you be the first P16 Billion Powerball jackpot winner from the Philippines?
Gretchen Barretto’s daughter Dominique graduates magna cum laude from California college
Ginebra beats Meralco again to capture PBA Governors’ Cup title
Don't miss out on the latest news and information.