‘Aquino will always listen to his ‘bosses’ 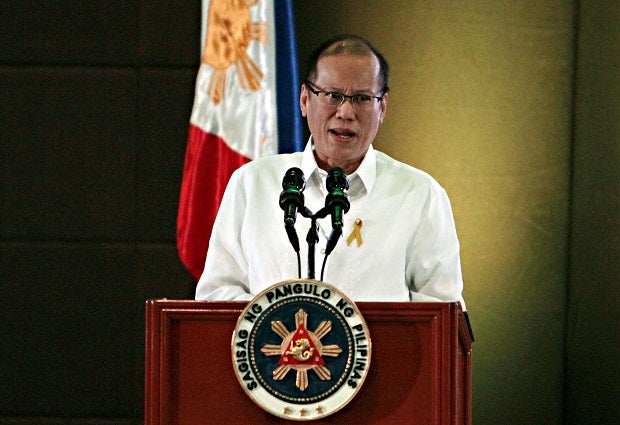 President Benigno Aquino III will see the writing on the wall and heed what would seem to be the emerging will of the people in the surveys showing that six out of 10 Filipinos oppose his as-yet-unannounced plan to seek a second term, according to Senate President Franklin Drilon.

“I’m sure the President is reading the surveys,” said Drilon, a close political ally of the President when asked if the survey results would make Mr. Aquino stop entertaining thoughts of reelection.

A Pulse Asia survey, conducted from Sept. 8 to 15, showed that 62 percent of respondents were not in favor of Mr. Aquino’s seeking reelection.

“The President said he’d listen to the people … He always listens to the voice of the people, his bosses. On this matter, he will listen,” he said.

Besides, Drilon said, Mr. Aquino is opposed to the idea of amending the Constitution just to lift presidential term limits—an essential step for him to qualify to run again.

“As far as I know, the President is averse to any constitutional amendment which will give him an opportunity to run again,” he said.

However, the group responsible for this week’s “mysterious” newspaper advertisements calling on Mr. Aquino to seek a second term emerged yesterday to announce that it was launching a signature campaign to that end.

At a press conference at the Quezon Memorial Circle, the Movement for Reform, Continuity and Momentum (More2Come) vowed to gather eight million signatures petitioning the President to run again.

“We urge others who believe in President Aquino, if you have felt the benefits of his administration, to join our advocacy,” he said.

Also at the briefing, which was hosted by Matibag, RJ Echiverri and his son Mico, of the Echiverri political clan of Caloocan City, were law students from San Sebastian College led by Gerlyn Oyos.

The group hopes the signature campaign will prod President Aquino into broaching to Congress the possibility of calling a constitutional assembly for amending the Constitution to lift presidential term limits that would allow the reelection of an incumbent President.

Mr. Aquino first broached the idea of seeking a second term in a TV interview last August. Last month, speaking before administration allies, he hinted that he might not be leaving at the end of his term after all, saying he hoped he would not be the Liberal Party (LP) presidential candidate in 2016.

Soon after, in an exclusive interview with the Inquirer, Mr. Aquino said he was “slightly open” to the idea of seeking a second term and outlined the reasons why he would, if he does decide to run again.

Mr. Aquino said he did not want his administration’s gains to go to waste. On top of this, he said he wanted to fend off those wishing to destabilize the government, flush out the aspirants for the presidency in 2016, and fight those who wanted to make him a lame duck.

“If I close the door [to term extension] now, it will embolden these people who want to destabilize [the government],” he said.

The President’s spokespersons on Friday would not comment on the results of the survey. Communications Secretary Herminio Coloma referred the Inquirer to his statement on the matter the previous day.

Reacting to the survey last Thursday, Coloma said the President continued to listen to the views of the people in a bid “to strengthen reforms” in government. He did not say categorically if Mr. Aquino would heed the results of the survey.

Presidential spokesperson Edwin Lacierda merely shrugged off a call from a multisectoral group led by Catholic bishops for the President to resign.

“We obviously differ from their assessment,” Lacierda said. “We go about in conducting the business of governance. We live in a pluralistic society.”

At an assembly in Cebu, the National Transformation Council asked Mr. Aquino to step down for supposely losing the moral ascendancy to lead the country.

“He [Aquino] has damaged the moral fabric of the society and has therefore lost the moral right to lead the nation. The assembly calls upon the incumbent to relinquish his position now,” Vidal said.

Armed Forces Chief Gen. Gregorio Pio Catapang said the bishops were expressing their opinion, and this should not be seen as an attempt at destabilization.

“That’s not destabilization, that is freedom of the press. That’s what I’m telling you that we have a vibrant democracy, a vibrant politics. So everybody is free to say what he feels for as long as they will not bear arms,” said Catapang, who was met with questions from reporters as he emerged from a Senate hearing on the defense department’s proposed 2015 budget.

At the very first press conference it called yesterday, More2Come, which counts some 100 members, found itself fielding questions on whether it had links with Malacañang or the ruling LP.

“We are not backed or funded by Malacañang. Not a single centavo from government funds is being used for our cause. This is our own advocacy. RJ and I started pooling funds from our own pockets,” Matibag said.

According to Matibag, some of the group’s first supporters were the clients of his law firm, and the San Sebastian law community, since he was a former teacher in the school. The older Echiverri was a former student, he said.

Matibag, who served as general manager of the Manila International Airport Authority during the Arroyo administration, invited the public to “look at my affiliations.”

“This is a clean advocacy. I got RJ, who is my friend, because of his national exposure [as national president of the Association of Barangay Captains] and because he believes in the advocacy. He will help when we go around the Philippines [for our signature campaign],” Matibag said.

“But I would be happy if Malacañang supported our cause,” Matibag said. “If they talk to us, we will talk to them. But we won’t do anything outside democratic processes or laws.”

RJ Echiverri, meanwhile, was put on the defensive by questions about his More2Come undertaking’s links to his father, Caloocan Rep. and LP member Enrico Echiverri.

“Can’t I be my own man? Can’t a son be independent from his father? I’m not a minor that I need to consult my father about everything, or that everything I do must be linked to him?” Echiverri said. He said he did not meddle in his father’s political affairs.

“[My father] was in the States with my mother when he found out about this. He called and asked what this movement was about and I said Pa, this is something personal, my convictions.’ He just laughed it off,” Echiverri recalled.

Echiverri, who lost in the 2013 mayoral elections in Caloocan, also denied any links with the LP. “Remember, as barangay captain, you should not be affiliated with any political party. When I lost as mayor, I returned to being a barangay captain, and as national president of all barangays, I’m barred from joining any political party,” he explained.

However, he admitted to having been affiliated in the past with the PDP-Laban and the LP.

“This is a small private group …. to know the real sentiment of citizens. What if we’re right that most Filipinos still believe in Aquino’s administration and in his ’right path?’ For as long as he can prove that he is sincere in serving the country, we will continue this. Taxpayers only want to see that their taxes are not being stolen. And is Aquino corrupt? No, he’s not,” Echiverri pointed out.

Matibag said the group will be taking the signature campaign around the Philippines, starting with Metro Manila.

Voice of the ‘bosses?’ 6 in 10 Filipinos reject Aquino term extension—survey

Binay: No to Aquino 2nd term